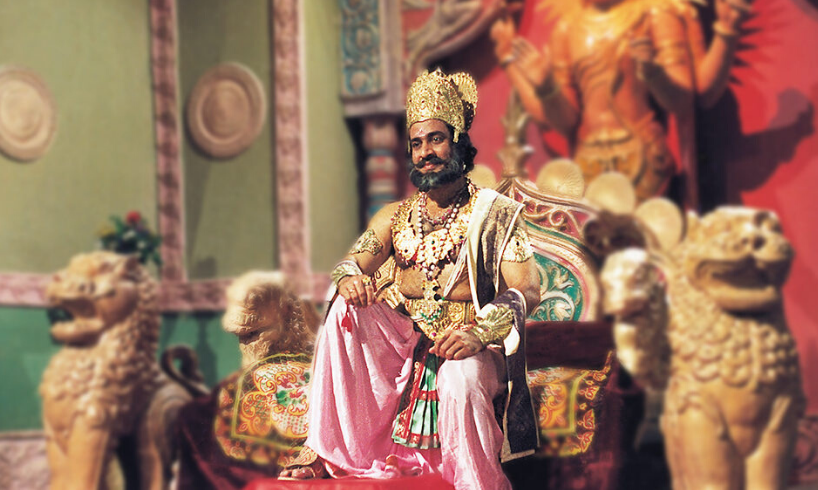 To fulfil the boon given to Rishi Kashyap and Aditi who were reborn as Dasarath and Kaushalya, Bhagwan Vishnu chose to be born as their son. Few sources also mention Dasarath to be a Brahmin in the Satya Yug who had done great penance about Bhagwan Vishnu. When Bhagwan Vishnu appeared before him, the Brahmin wished for the pure affection of the Almighty and nothing else. Pleased with this, Bhagwan Vishnu says that the Brahmin would he would be born as Dasarath and he as Shri Ram in the Treta Yug, and their bond of father and son would be remembered as one of the greatest bond of pure affection till eternity.

Thus, Dasarath was the son of Aja Maharaj and Indumati. He was named Nemi by his parents, but got the title of Dasarath as he had the ability to ride ten horses at the same time. Dasarath was a great warrior and was the prime support of the Devas in many wars against the demons. His fame spread wide and far as a great warrior. After he was crowned as the king of Ayodhya, Ayodhya became another heaven for people as Amaravathi. Ayodhya prospered and flourished in all aspects of justice, law and order and his people lived a prosperous life under his rule.

Meanwhile, Ravan comes to know that the son of Dasarath would kill him. He also comes to know that Dasarath was getting married to Kaushalya, the princess of Magadh. Ravan abducts her before marriage and locks her in a wooden box and throws it in the sea. Meanwhile, Dasarath was on a sea voyage and was hurriedly returning back to his kingdom as he was getting late for his wedding ceremonies. He notices the wooden box floating in the waters and pulls it onto the ship. When he opens the box, he is surprised to find his bride in the box. At that moment, all the celestials appear in front of them and let them know that Bhagwan Vishnu will be born as their son and they were the destined couple chosen by the Almighty, and perform their marriage then and there itself.

Later through the Putrakamesthi yagna, Maharaj Dasarath was blessed with four sons. Maharaj Dasarath was the most doting father one would ever know. This did not mean that he spoilt his four princes, but he saw to that they grew up in accordance with the rules of Dharma and understood the importance of virtues of truth, honesty, humility and courage. It is this very upbringing that Shri Ram stood for the value of his father’s promise and left to exile to fulfil his father’s word. Standing for Dharma and his fatherly love, Maharaj Dasarath sacrifices his life.

The virtues, courage and sacrifice of Maharaj Dasarath was always acknowledge by his son Shri Ram who preferred to always introduce himself as the son of Dasarath, rather than being known as the great warrior he was.