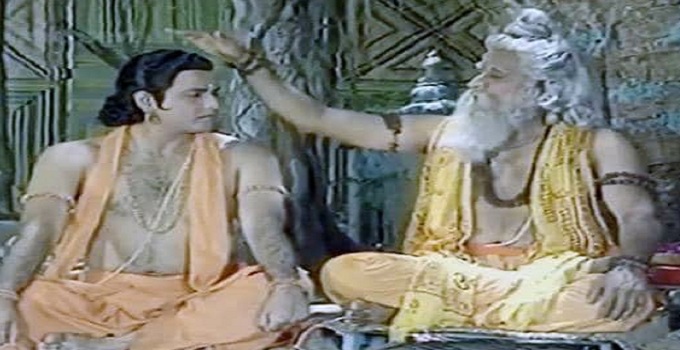 A guru is the representation of the Almighty in this world. The priceless value of a Guru is proved by the Almighty himself when as Shri Ram, being the creator of the Universe becomes the humble student of a Guru to learn the same knowledge he created and offered to the world. His bond with his Gurus is a beautiful example how a realtion of Guru and a sishya can become a beautiful bond of a lifetime.

Shri Ram and Rishi Vashisth – Shri Ram shared a special bond with his first preceptor Rishi Vashisth. While undergoing their education, Shri Ram and his brothers lead a simple life in the Gurukul Ashram treating themselves as equal to the other students and become one among them, rather than showing off their status as the princes of Ayodhya. Shri Ram learns his best virtue of humility from Rishi Vashisht and through that brings eternal fame to himself and also his guru by following it all life. Shri Ram treated Rishi Vashisht as his mentor for life and never went against the command of his guru all his life, which bought him great fame as a humble and noble prince.

On Rishi Vishwamitr’s command, both the brothers set out to Mithila. In Mithila, although all were enchanted by the beauty of Shri Ram and respect him for achieving huge tasks to slaying the demons,, he portrays himself as the student of Rishi Viswamitr only, rather than a hero. In the Swayamvar, although Shri Ram had all the love for princess Sita, he always adhered to the word of his Guru and broke the Shiv Dhanush only after the order of Rishi Vishwamitr, even though he knew that Mata Sita was worried that when would he step ahead and win her. His respect for his guru is so great that even when Maharaj Dasarath reaches Mithila, Shri Ram goes to visit his father only after Rishi Vishwamitr takes him along as his student, but not individually as a son.

The bond of a Guru and a Sishya is the only one which has no conditions, except sharing and spreading the knowledge of Dharma in all ways. Shri Ram proves that when a student becomes successful in his life and sometimes greater than the Guru, the greatest happiness is that of the Guru who trained him to be so. After killing Ravan, Rishi Vashisht feels blessed that he was the Guru of Shri Ram. But as the most humble student, Shri Ram offers all his success at the feet of the Guru and shows that that is the greatest Gurudakshina one can offer to his Guru.