Every year brings a new dawn, new hopes, new aspirations and of course of new challenges. Challenges are common to all, however one can overcomes them when there is a proper approach, clarity in life and a set of ideals which help life be a better one every day. The Ramayan is abundant of such ideals and Shri Ram is the treasure trove of the virtues. With the new year coming in, the ideals of Shri Ram bring in a new hope of life for us. 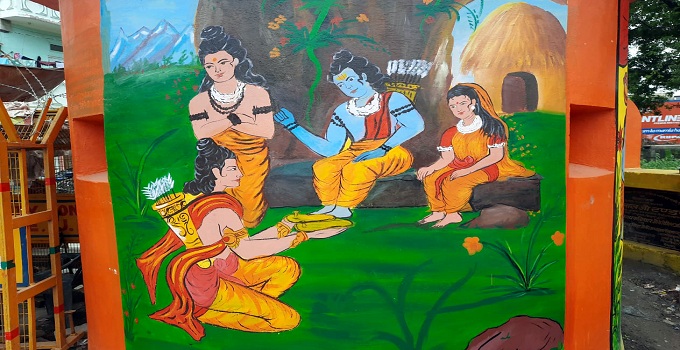 Truth is the only thing which never changes. Years come and go, but truth stands firm. Shri Ram made this virtue as his best weapon to fight the challenges of his life. Abiding to truth, he spent fourteen years in exile, he kept up his promises to his friend Sugriv making him the king of Kishkinda, and also stood up for Vibhishan in his fight for truth and made him the king of Lanka. When one follows truth, his conscience is clear and gains strength in his path of life. Although many challenges come, the Almighty helps the one who stands for the truth.

When Bharat comes rushing to Chitrakut and requests Shri Ram to come back to Ayodhya as King, Shri Ram stands for honesty. The entire kingdom and people including Queen Kaikeyi request him to keep aside the word given to Maharaj Dasarath and come back to Ayodhya. But honesty being his virtue, Shri Ram convinces Bharat that his father had given up his life for truth and being his son, he would stand to keep up his word or there would be no value for his father’s Dharma. An honest person is very strong as he has none to fear, and when there is no fear, then there is no defeat. Honesty helps one gain confidence towards life and not fall for shortcuts in life, which helps go a long way in life.

Fear has a strong opponent and that is Courage. Shri Ram never lost his courage and hence could be successful in even his adverse times. He was in grief when Mata Sita was separated from him , yet did not lose courage and showed great courage ans went ahead in search for her till the end of the world. Even the mighty waters had to bow down to him in his courageous task of building the the Ram Setu. Life is a battle and one needs to never lose courage to fight it and Shri Ram is the perfect example of courage.

Life is a combination of light and darkness, but what one needs to remember is every night ends in the dawn of the morning sun. Shri Ram faced many obstacles in his search for Mata Sita. He did not know her whereabouts but with hope set out in the South direction. He waited patiently for her information and was always hopeful that she would be waiting for him to arrive and save her. His hope became the determination of his entire army and finally their mission was successful in the search of Mata Sita. Hope is the only thing which never loses its fight and one needs to always be full of hope.

The four ideals of Shri Ram like the four Vedas proved that following them would be the greatest
victory in life’s challenges and definetly call for a new beginning.