Arjun, the Pandav is known for his valour and skill in archery as the best archer in the world. The greatness of this warrior is that his skill did not just stop with him, but passed on to his sons too who also the skilled archers were keeping up the name of his father. While Abhimanyu was the valiant one whom even all the Kauravas too feared, the other son was Babruvahan who was not only the skilled archer, but also the one who defeated Arjun itself in a war and proved his mettle. 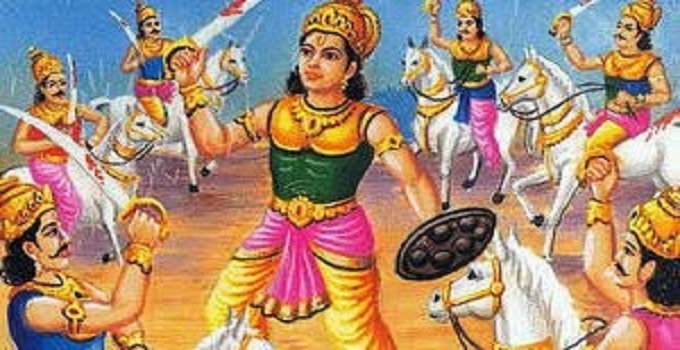 Babruvahan was the son of Arjun and Chitraganda, the princess of Manipur. During his pilgrimage travel, Arjun travels to the city of Manipur, and sees Chitraganda, who was the daughter of Chitravahan, the king of Manipur. He falls in love with her and requests Chitravahan to offer her hand in marriage to him. Chitravahana agrees with a condition that the son born to them would be the heir of Manipur as the king did not have any male progeny for the lineage to continue. Arjun agrees and spends sometime with Chitraganda and elves for Indraprasth. Later a son is born to Chitraganda whom she names Babruvahan and raises him to be a son equal to his father Arjun.

Babruvahan grows to be an intelligent and a great warrior like Arjun under the tutelage of his mother. Although he never saw his father, he always revered and respected Arjun and waited for a chance to take his blessings. Years pass on and Yudhisthir becomes the king of Hastinapur after the battle of Kurukshetra.

For the welfare of the kingdom, Yudhisthir decides to conduct the Aswamedh Yagn which would bring prosperity to the kingdom. The Yagn begins and Arjun is sent after the sacrificial horse for the kings to accept the sovereignty of Yudhisthir. The horse reaches the kingdom of Manipur. Although Arjun yearns to see his wife and son, he gives the first priority to duty and asks the king to accept the sovereignty of Hastinapur.

But Babruvahan refuses as he believes that his first Dharma as a Kshatiriya is to protect and safeguard his country’s honour. Hence, he captures the sacrificial horse and challenges Arjun to a fight. Arjun accepts the challenge and a war starts between the father and the son. Although Arjun was an exceptional warrior, Babruvahan was no less in archery skill to Arjun and overpowers Arjun with the great Nagastr which leaves Arjun petrified and he falls to the ground.

Although Babruvahan challenged Arjun, he is shocked to see his father being defeated and rushes to Arjun. He laments for Arjun’s condition and feels bad for the misery that he had to meet his father for the first time in the battlefield in such a state. But, Arjun’s wife Ulupi, the daughter of the king of Nagas, comes to the rescue and brings with her a pot of elixir which gives life and helps Arjun regain conscious. Babruvahan is elated and falls at the feet of Arjun asking him for forgiveness for fighting against him. But Arjun praises him that he was a true Kshatriya who gave first importance to duty than family.

Arjun crowns Babruvahan the King of Manipur and resumes his journey to Hastinapur. Babruvahan is the lesser known warrior who met his father only once in a lifetime, yet shone with all the qualities of being a great warrior and a righteous person like his father and proves worthy a son of Arjun.