The greatness of a lotus is it blooms in mud and dirt. This is a beautiful example that there might be good present even amongst the bad, and such goodness is always protected by the Almighty. The great king Bali Chakravarthy is one such virtuous person who shone with virtues of goodness, even though born as a demon. His greatest virtue was to never go back on his promise, and that which gave him eternal fame as the devotee of Bhagwan Vishnu. 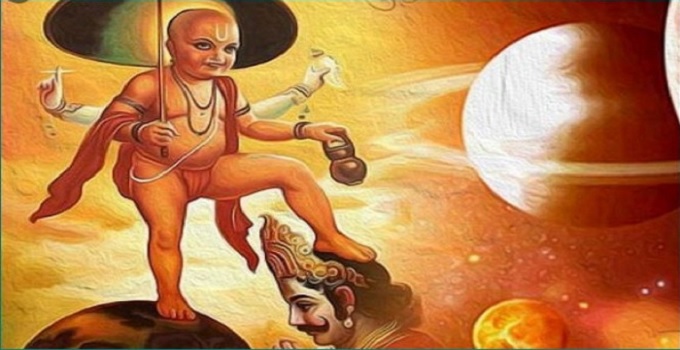 Bali Chakravarthy smiles and then mentions to his guru that a promise or a word given is the most valuable thing ever and one cannot step back from it. King Bali mentions that even if it is likely to bring harm also he wouldn’t budge on going back, as it is against Dharma to break a word given. When Rishi Shukracharya says that this would lead to dire consequences too, the king mentions that when the Almighty himself has come to ask him for something, then the almighty would also protect him too.

With this, although knowing that Bhagwan Vishnu had come to protect the Devas and disturb the Yagna, the noble king thus keeps his word and donates the three steps of land. Assuming the Vamanavatara, Bhagwan Vishnu grows enormously in his size and places his two steps on the entire universe and the Earth. When he asks the king as to where to put his third step, King Bali bows down and asks him to step on his head. Bhagwan Vishnu gets immensely pleased with the sacrifice of Bali Chakravarthy and offers him his protection forever. Making Bali the king of the Patal Lok, Bhagwan Vishnu himself becomes Bali Chakravarthy’s gatekeeper.

The value of keeping a word might bring in initial difficulties, but the result proves to the one which is beneficial to self and the others too. With Bali Chakaravarhty keeping up his word, he becomes dear to Bhagwan Vishnu and at the same time stops the demons form taking undue advantage through him and saves Dharma, and forever became one of the most generous kings the world has ever known.