Friendship is a best gift given by the Almighty to the mankind wherein one has a person to share his joys and sorrows and beautiful memories to be cherished all lifetime. The virtue of friendship is so beautiful that the Almighty himself loved being a good friend and having one too. The priceless virtue was very dear to him and he proved it with his friendship with the simple Sudama in his incarnation as Shri Krishna. Krishna was special, as a son, as a brother, as a lover, as a husband, and as a friend. From being a simple cowherd to the Jagadguru, he neither forgot his roots where he started, nor the people with whom he spent time with. One such relation he had as a friend was with Sudama, the poor Brahmin during his Gurukul Ashram days. Sudama and Shri Kirshna were great friends and enjoyed each other’s company with great fun and happiness. After their Gurukul training was over, although they separated on their own paths, Shri Krishna and Sudama never forgot their friendship and kept each other in their hearts.

Sudama got married to a pious Brahmin girl Niyati and had many children, but was suffering from poverty. One day when Sudama was feeling low about his state, Niyati gives him an advice to go and seek the help of Shri Krishna. Although Sudama hesitates in the beginning, he finally agrees to go and visit his dear old friend. But he wonders what to take him as a token of gift. Niyati searches the whole house and gets a handful of Poha (flaked rice). She rips apart a corner of her saree, ties them in it and gives it to Sudama.

Sudama travels and reaches Dwaraka and is astounded to see the magnificent Dwaraka and hesitates to go ahead looking at his own poor state, but suddenly the gates open and he sees Shri Krishna rushing towards him with great joy. Shri Krishna welcomes Sudama and along with Rukmini looks to the needs of Sudama personally and make Sudama feel relaxed. Sudama is awestruck by the hospitality of his friend and gets lost for words. Then Shri Krishna asks him that what Sudama got for him. Sudama is reluctant to give him the Poha, but Shri Krishna sees the bag and snatches it from him. He is elated to see the Poha in it and eats two handfuls with great happiness. When he is about to take the third, Rukmini stops him. Sudama does not understand why, but forgets about it in his happiness of his friend’s affection. The next day Sudama starts back home with a heart full of happiness. 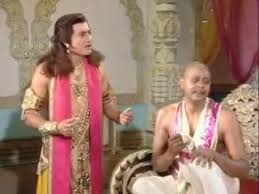 When he reaches his home, he is surprised to find a huge palace with numerous servants and aides in place of his poor hut, his wife and children decked with jewellery and beaming with happiness. He then remembers that he had not asked anything in the happiness of spending time with his friend, but Shri Krishna gives him all. For the first handful of Poha, gave a palace, for the second, the riches. Rukmini who understood the intention of Shri Krishna stops him at the third as he would give away his family too, and hence stops Shri Krishna from taking the third. Thus, Sudama becomes free of poverty. With this beautiful gesture, Shri Krishna depicts that a true friend always has the back of the other and are friends forever.