Out of the infinite names of Bhagwan Shiv, he is addressed as Pinakapani, the one who yields the divine bow Pinaka. Bhagwan Shiv is depicted with a trident in his hand, however with the great bow of Pinaka, he destroyed the invincible demons Tripurasuras. The Tripurasuras were sons of Tarakasur namely Tarakaksha, Vidyunmali and Kamalaksha. With three flying cities of Gold, Silver and Iron acquired from Brahma Ji and built by Mayasur, the architect of demons, they created havoc in the three worlds. All the gods seek protection from Bhagwan Shiv and he decides to vanquish them. 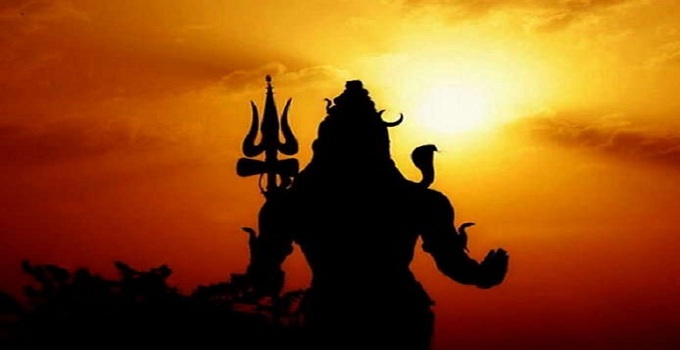 The Tripurasuras were bestowed with a boon that they could be vanquished along with their cities only when the three cities came in alignment in one line and shot with only a single arrow. As the cities are flying cities, this task was impossible to perform. But, as the protector of good, Bhagwan Shiv takes up this mighty task of destroying the cities when they come into the perfect alignment of a single line.

Then Viswakarma, the architect of Gods, prepared a great bow made out of gold. Mount Meru, the king of the mountains became the bow, while Seshnaag became its string. Goddess Saraswathi adorned the bow as its bell, and finally Bhagwan Vishnu became the great arrow to shoot at the Tripurasuras. At the aligned time, when all the cities of the demons came in a line for just a second and Bhagwan Shiv shot the arrow. With great speed, the arrow hit the cities in a straight line and destroyed them along with the demons. Thus, the world was saved from the atrocities of the Tripurasuras by Bhagwan Shiv and peace was restored in the three worlds.

The bow which was created by Vishwakarma was called the Pinaka, and thus Bhagwan Shiv came be to be known as Pinakapani. After destroying the demons, Bhagwan Shiv gave the divine bow to Devraj Indr, who later gifted it to the ancestors of Maharaj Janak. Thus the great bow came to be worshipped in the royal dynasty of Maharaj Janak. The bow was unsurpassable in weight and might and there was nobody who could lift it nor string it again.
Bhagavathi Lakshmi who was born as Mata Sita once playfully lifted the bow with ease. This surprised Maharaj Janak and also gave an enlightenment to the king regards her marriage. As he knew about the divinity of Mata Sita, he put a condition for her marriage that he would give her hand in marriage to only the warrior who could not only lift it, but also string it too.

When all the mighty warriors of the land fail, then on the command of Rishi Vishwamitr, Shri Ram lifts it and strings it. Shri Ram decides that after the bow was yielded by Bhagwan Shiv and himself, it cannot be yielded by anybody else and hence he breaks it too, returning back the bow back to the devas through this. Thus, Bhagwan Shiv came to be known as Tripuraari, the destroyer of the Tripurasuras.