There is a small, yet beautiful story of a king who was an ardent devotee of Bhagawathi Lakshmi. The king worshipped her in her eight forms of wealth, prosperity, progeny, courage etc. Once the goddess got upset with him for some reason and wanted to leave him, but out of pity for her devotee says that she would remain in only one form with him and asks him to choose among her eight forms. The king immediately chose Dhairya Lakshmi (the form of Courage). Bhagawathi Lakshmi asks him the reason behind selecting Dhairya Lakshmi as he chose neither wealth nor success, but a simple form of courage. The king humbly says that wealth, prosperity, success all would come and go, but with courage, the person can gain back all what he has lost, and hence he requests Dhairya Lakshmi to stay. Bhagawathi Lakshmi is immensely pleased with his answer and she stays back with him along with her eight forms blessing him with abundance of success and prosperity. This simple story teaches us that courage is everything. Shri Ram’s life is an open book when it comes to lessons of courage. His courage raised him from the identity of a human to the status of God. He dealt any situation of life with courage and that’s what always made him different.

As the adorable son of Maharaj Dasarath, Shri Ram’s life would have been a comfortable one. Yet he faced the toughest challenges of life, and his greatness lies in facing them with a smile on the lips, and tons of courage in the heart. Although he is the favourite to Queen Kaikeyi, she herself tests his courage by asking him to leave to the forest. Without any complaints, he not only convinces Lakshman the Dharma behind it, but also gives courage to Queen Kaushalya and Maharaj Dasarth to wait for his return and allow him to go in his duty of Dharma. A courageous person is not affected by the unexpected challenges of life and prepares for it.

The forest is not a bed of roses, but the path of thorns, yet nothing deters the courage of Shri Ram. The greatest wisdom and courage of a person is to accept life as how it comes and also give others courage to be strong. Shri Ram offers protection to the simple Rishis of the Dandak forest from the perils of the demons. Along with Lakshman, he destroys the demons causing harm and guards the Dandak forest as a brave soldier who protects his people and land. A courageous person takes up any challenge and situation and works for creating a better life for himself and his people. 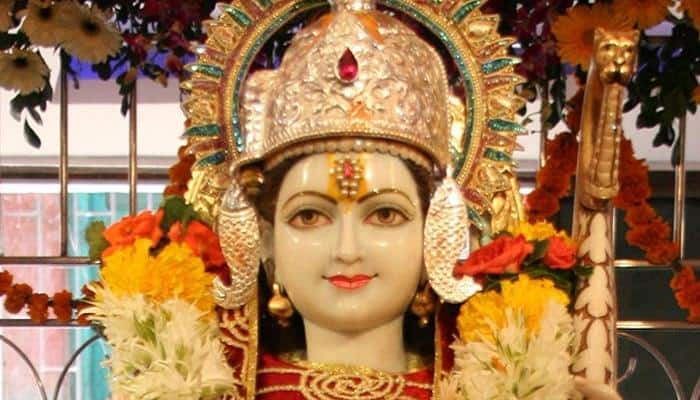 When Mata Sita was abducted, being separated from his beloved was the most painful challenge of his life. Yet he gathers courage to reunite with his beloved. His nerve and determination make him bridge the waters of the mighty Ocean and reach Lanka. He faces an army of sorcery and trickery demons with his valour and gives courage to the whole of his monkey army. He not only self- motivates himself, but also motivates his army too and achieves success in the battle, thus proving that courage makes anything possible.

The courage of Shri Ram lies in his belief in truth and himself. Courage is the greatest possession one can have, and never should let away with it. Shri Ram inspires that it is courage that makes us moving in life, no matter what the situation is.