The most popular theory of evolution of life is the theory of the famous Biologist, Charles Darwin Change is the only thing which is constant and according to our ancient and modern theories, the world has been evolving and changing from the past ten billion years. But, it is a true fact that all the western theories were inspired and took help from our Vedas, Puranas and Upanishads which explained the theory of the evolution of life even before anybody had understood it. The protector of the Universe and the all-pervading Bhagwan Vishnu through his Dasavatar forms glorified the concept of evolution of life which till date reflects our great knowledge and wisdom. 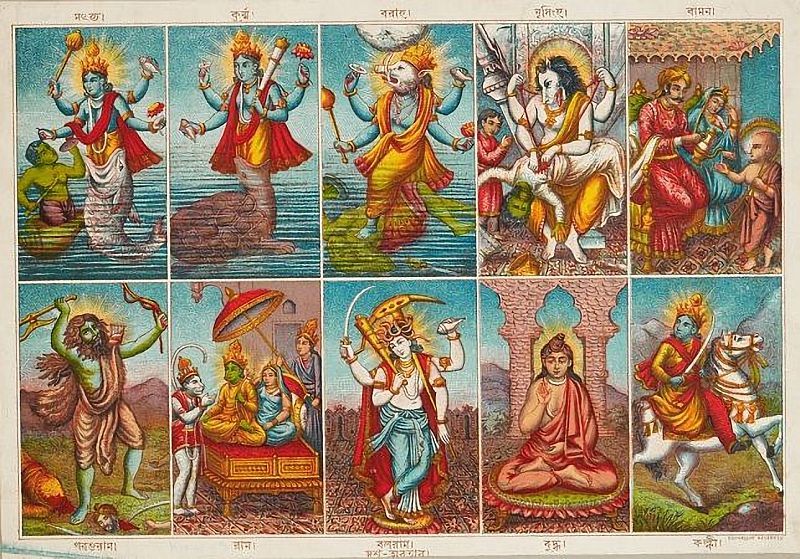 According to the Bhagavat Puran, there are twenty four Avatars of Bhagwan Vishnu, out of which the Dashavatar forms are the most important which signify not only the preservation of Dharma and destruction of evil, but also signified how life evolved in its fullest development.

In the fourth Avatara, Bhagwan Vishnu takes the form of half man and half lion as the Narasimhavatar, indicating the evolution of two legged man from four leg animals. The fifth Avatar is the Vamanavatara is the dwarf form of the human and the sixth form is the Bhagwan Parashuram wherein Bhagwan Vishnu showed the evolution of the complete man in his full size.

Born as Shri Ram, Bhagwan Vishnu shows evolution of life in as a full matured man with virtues like truth, honesty, humility and many more emotions to which he reacts and responds. It is seen here that all the evolutions like the fish, tortoise, dwarf, animals all started to live alongside the complete growth of a human and survived along with man. As Shri Krishna in the eight Avatar, Bhagwan Vishnu shows how man should react to his problems in an intellectual and a smart way so that there is no dominance of the evil.

In the ninth Avatar as the noble Buddha, Bhagwan Vishnu shows the renunciation of all goodness and sorrow and to understand that life gets merged with the Almighty and hence life has to be spent in doing things which can take it ahead in a productive and a positive way. Finally, in the Kalki avatar, Bhagwan Vishnu ends all the evil forces and starts a new life thus showing the cycle of life.

In his ten Avataras, Bhagwan Vishnu not only shows his magnificence as the protector of the Universe, but also shows the process of evolution which keeps changing from time to time and yet remains constant.