A teacher is remembered whenever a student shines with great excellence and success as it is because of the tutelage which he receives from the Guru which makes him the best. However, there is one teacher who is also remembered for hindering the progress of a student to achieve success and the student had to give the greatest sacrifice of his skill for the sake of the teacher. The teacher is Guru Drona and the student is Ekalavya and their story is remembered for the respect what a student has on a teacher and the sacrifices made to acquire a skill. 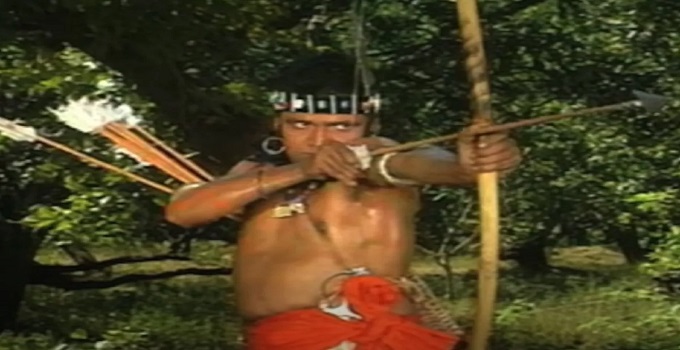 Since childhood, Ekalavya showed keen interest in archery and had outstanding skills in it. His father understanding his zeal approached Guru Dronacharya to make him the world’s best archer. However, as guru Drona had already promised Arjun the same, Guru Drona refuses to teach him on the pretext that Ekalavya belonged to a Bhil tribe and a lower caste and sent them away. But this does not deter the young Bhil and he instead makes a clay idol of Guru Drona and continued his archery offering his services to the idol as Guru Drona.

Ekalavya’s determination and sheer devotion for his guru makes him a perfect disciple and in no time, he masters the complete technique of archery. One day, the Pandavas and Kauravas one day go hunting in the forest. One of the hunting dogs goes chasing the animals’ drifts away from the entourage and when it returns back, the princes are surprised to find its mouth filled with arrows. Arjun is surprised at such skill of the archer and goes in search of the person who shot them. He finds Ekalavya practising in front of the Guru Drona’s idol. Arjun feels disheartened seeing Ekalvaya’s skill which was better than him. He goes to Guru Drona and mentions the same about Ekalavya.

Guru Drona on the verge of fulfilling his promise of making Arjun the world’s best archer comes to Ekalavya. Overjoyed seeing his Guru, Ekalavya welcomes him duly and offers him warm hospitality. He then asks the reason Guru Drona has come in search of him to his humble abode. Guru Drona says that as Ekalvaya treated him as his guru, he came to ask for his Guru Dakshina. Ekalavya with great happiness mentions to ask him the same. Guru Drona asks for the right thumb of Ekalavya. This comes as a shock to Ekalavya as he would not be able to be the same archer once he cut his finger. But obliging to his guru’s command and although knowing that this sacrifice would cost him his skill, Ekalavya keeps his promise and cuts off his thumb and offers it to Guru Drona.

Guru Drona is shocked and with great guilt feeling, thanks Ekalavya for the sacrifice which would make Guru Drona keep his promise with Arjun. Later, although Ekalavya continued to be an archer, he could not be as skilled as Arjun because of his disability. Later Ekalvya continued to be a left hand archer in the army of King Jarasandha. He fought the battle in the side of Jarasandha with Shri Krishna and was killed in the battle in the hands of Shri Krishna.

Sacrifices are many, few are remembered, and few are forgotten. But they never get wiped away in the annals of time. Ekalavya till date stands as an example of pure devotion towards his guru and is remembered as one of the most selfless student known forever.