Rishi Vishwamitr is the well-known sage for his significant role in defining the character and destiny of Shri Ram in Ramayan. However, his destiny was a different one prior to a sage. The main role behind Vishwamitr transforming himself into one of the greatest sages of our Sanatana times was Gau Mata Shabala. It was because of this divine cow that Shri Ram had a great preceptor and the world had a great Brahmarshi. 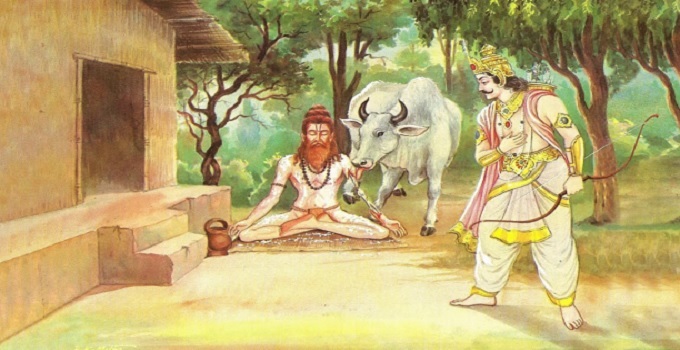 The Kamadhenu is the celestial cow which was born during the churning of the Milky Ocean. It had the power to grant any wish and desire. Shabala was the daughter of Kamedhenu and had had the same celestial powers as her mother. Shabala was gifted to Rishi Vashisth by the Devas, who worshipped her like his mother and fondly took care of her.

Vishwamitr, who was ruling over the Mahoday Kingdom, was a powerful king who had a great desire to become an Emperor and thus was invading all kingdoms and winning over them. In the course of his war expedition, Vishwamitr came to Rishi Vashisth‘s ashram and greeted him. Rishi Vashisth welcomed Vishwamitr warmly and offered hospitality to the king and his army. But, with the pride of being a king, Vishwamitr refused Rishi Vashisht’s hospitality mentioning that the simple Rishi could not feed his vast army. But Rishi Vashisth politely mentioned that he could feed all his army and even more too. He called upon Shabala and requested the divine cow to provide food and all comforts to King Vishwamitr and his innumerable army. Shabala agreed and within no time, provided what all was necessary for the King and his army.

Vishwamitr was awestruck at the divine powers of Shabala, wished to take the divine cow for himself and asked Rishi Vashisht to give Mata Shabala to him. Rishi Vashisth politely said that Shabala was like a mother to him and he could not force her to go with the king. This made Vishwamitr was angry at these words and decided to forcefully take Shabala away with him.

Vishwamitr ordered his soldiers to drag Shabala to him. But, none of the soldiers could move her. For the pain caused to her, Shabala got furious and with her divine powers created millions of soldiers who in few minutes vanquished the whole of Vishwamitr’s army. Instead of understanding the divine powers of Mata Shabala, Vishwamitr tried to strike Rishi Vashisth and Shabala with his little knowledge of Astras and Sastras, but none worked before their yogic powers. The pride and arrogance of King Vishwamitr was thus defeated by Shabala and he was left alone with no army to defend him.

Humilated and defeated, Vishwamitr understood that true power was in meditation, but not war. He decided to become a Rishi like Vashisth. He immediately renounced his kingdom and retired to penance. After overcoming great challenges, Brahma Ji appeared in front of Rishi Vishwamitr along with Rishi Vashisth and granted him the highest position of a Brahmarshi. Thus, Vishwamitr’s encounter with Gau Mata Shabala made him from a king to a great Rishi. Nothing happens without a reason and in a way Mata Shabala was a significant reason for Vishwamitr to emerge as the greatest of Rishis one has known in our Sanatana Dharma.