Dharma is the one eternal factor which is not only preserved and protected by the Almighty, but it is the duty and responsibility of each and every creation and life to preserve and protect it. In this great deed, even the divine Apsaras (celestial dancers) of Devraj Indr’s court also had a role to play. They simply break the notion that they were just not entities of beauty and grace made up for the pleasure of the Devas, but they also had a purpose with their beauty and the major one was to protect Dharma and destroy all those who hindered it. One such story is that of the celestial dancer Tiilottama who with her intelligence led two powerful demons Sunda and Upasunda to their end. 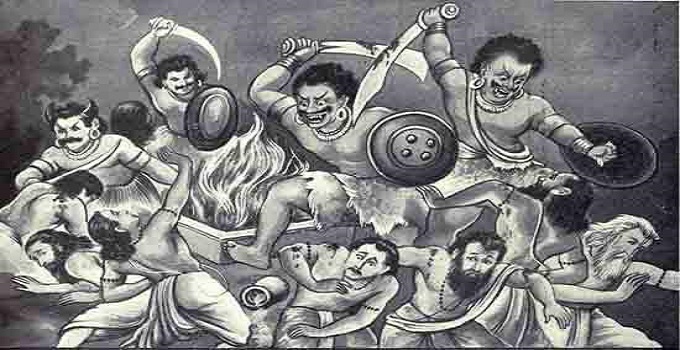 The story of Sunda and Upsunda is mentioned in the Mahabharat. The two demons were the sons of the powerful Rakshas Jambha. Since childhood, the thoughts, actions of both the brothers were of a single mind. When they grew up, they wanted to conquer the worlds and hence performed severe penance for Brahma Ji to gain powerful boons. Their penance scorched the entire Universe and Brahma Ji to save the world, appeared in front of them and asked them what they wished for. They asked for immortality, but Brahma Ji refused saying that all born had to perish. Then, the demons requested Brahma Ji to grant them a boon that they would only die in the hands of each other but not by any other means as they were quite confident that they would never fight against each other. Brahma Ji agreed to this and granted them the boon with a request that they put their powers to good use instead of disturbing Dharma.

With the boon of brahma, Sunda and Upasunda became arrogant that there was none who could destroy them. They neglected Brahma Ji’s words and started troubling the entire worlds causing hindrances to Dharma. The Devas who were troubled by the atrocities of the demons sought Brahma Ji’s help. Understanding that the demons needed a taste of their own greed, Brahma Ji created a beautiful Apsara named Tillottama and asks her to play her part in protecting Dharma. Tillottama agrees to this and taking the blessings of Brahma Ji reaches the two demons.

Sunda and Upasunda look at the mesmerising beauty of the Apsara and fall in love with her. They approach her to marry them. Tillottama with an innocent face, asks them a question that she was impressed by both, and wonders whom she had to marry among both. The greed for her beauty entices the demon brothers and the brothers start having an argument as each of them wanted Tillottama for himself. A conflict ensues and it leads to a great war between the two brothers in which the two brothers kill each other. Their own greed becomes the reason for their end. Tillottama thus becomes successful in fulfilling the job entrusted to her by Brahma Ji. Pleased with her intelligence, Brahma Ji grants her a permanent place in the court of Devraj Indr.