The famous city of Puri is called as the Sankha Kshetr, as the city is in the shape of the conch. The city on the seashores is popular for the most coveted temple of Shri Jagannath. This is the only temple where Shri Krishna is worshipped along with his brother and sister as Shri Jagannath, Shri Balabhadra and Devi Subhadra. The idols are made out of a huge log and it is interesting to know the story of the idols which are unique amongst all. 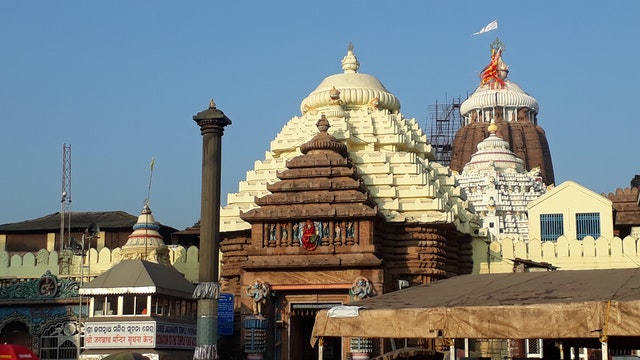 Puri was ruled by a noble king Indradyumn who was an ardent devotee of Bhagwan Vishnu. One day he had a dream about Shri Krishna as Neela Madhava. He was astounded by the beauty of the deity and decided to construct a temple for him and sent his ministers in search of the deity. One of the ministers Vidyapati searched all over and finally met a tribal chief Vishvavasu.

Vidyapati noticed Vishvavasu secretly going into the forest everyday and asked him the reason. Initally vishvavasu refused to tell the reason, but after repeated requests of Vidyapati, he agreed to take him blind folded to the place. Vidyapati agreed but secretly carried mustard seeds along with him and threw the all the way to mark the way. When they reached the place, Vidyapati‘s joy knew no bounds when he realised that it was the place where Vishvavasu worshipped the deity Neela Madhava. He waited a few days for the mustard plants to grow and finally learnt the way to the place and rushed to mention the same to the king. Indradyumn was overwhelmed and went with all his retinue to fetch the idol. But the entire hill got covered in sand dust and the idol disappeared from there.

Dejected, King Indradyumn returned back. That night, in his dream, Bhagwan Vishnu appeared and said he would like a temple with an idol carved out of fragrant wood. Indradyumn agreed heartily and a huge temple was constructed for the same with sculptors giving it a beautiful shape. The king was worried as to how the idol would take shape. With heavy thoughts, the king went for a stroll on the beach. To his surprise, he found a huge log shining as the blue gem floating on the waves. While the king was wondering at the beauty of the log, an old man came up to him and said that he could carve the idol with the log befitting the great temple Indradyumn had built, but with a condition that he would do that in absolute secrecy for which Indrdyumn agreed.

As the carving continued, no one was allowed to enter the chamber of the temple and everybody in the kingdom was keen and curious as to how the idol was being shaped. On the fourteenth day, unable to bear the suspense, the Queen peaked inside to see what was happening. She saw Viswakarma, the divine architect giving shape to the deities. But as the promise of secrecy was broken, he disappeared leaving the idols of Shri Jagannath, Balabhadra and Subhadra. The queen realised her folly and Indradyumn was disappointed that the idols were unfinished. But Bhagwan Vishnu reassured them that he liked to be installed in the same form as Shri Jagannath. The beautiful trio images even though incomplete are the testimonies to the great devotion of King Indradyumn who wished that he remain the eternal servant of the lord of the Universe, Shri Jagannath.