Rishi Agastya is the great seer who devoted his life to the service and welfare of Dharma through his various deeds. Possessing great austerities through his penance, he used all his power in welfare of mankind and helped them in various occasions. At one time, he drank the entire Ocean for Devraj Indr to kill the demons hiding in its depths, and another invented the battery which would help man progress in the Vigyan Sastras. He was respected by the Devas and humans alike and was revered by the Trinity too for his pure devotion on them.

During the time of the marriage of Bhagwan Shiv and Bhagwathi Parvathi, all the sages with divine knowledge travelled north to Himalayas to witness the marriage festivities. This resulted in the imbalance of Mother Earth with all knowledge going north. Bhagwan Shiv understood the problem and asked Rishi Agastya to stay back in the south and balance earth as his single knowledge was enough to retain the balance of Mother Earth back.

In South, Rishi Agastya saw that the lands were parched with famine and feels sad. He requests Bhagwan Shiv to grant a river to the South which would help the lands become fertile. Bhagwan Shiv grants a small portion of River Ganga from his hair locks in Rishi Agastya’s kamandal and orders the water source to flow as a river from the place where Rishi Agastya gave it a signal to do so. Rishi Agastya carries it to the South and starts searching for the right place to originate the river.

Meanwhile, a demon named Surapaduman knew about this. He did not want the people to be rid of their suffering and plans to steal the Kamandal from Rishi Agastya. On the other hand Rishi Agastya feeling low for not able to attend his dear swami’s wedding sits on a mount top and gets engrossed in the deep thoughts of Bhagwan Shiv. He does not notice that Surapaduman was lurking nearby trying to steal the Kamandal from him.

Bhagwan Ganesh who was witnessing all this decides to save the river and fulfil the purpose of Rishi Agastya of making the South land fertile. He takes the form of a crow and comes to Rishi Agastya and starts to bother him. Initially the rishi ignores it, but when the crow comes and perches on the Kamandal, Rishi Agastya tries to shoo it away by raising his hand. Taking the raised hand as a signal from the Rishi, the water comes from out of the Kamandal and starts flowing as a river down South. In this way, the demon’s plan to steal the river fails and he runs away from there, fearing Bhagwan Ganesh. Agastya is bewildered on what has happened, but Bhagwan Ganesh appears in front of him and explains him the plot of Surapaduman. Rishi Agastya feels elated that his mission was saved and fulfilled by Bhagwan Ganesh and pays his respect to the elephant headed God. 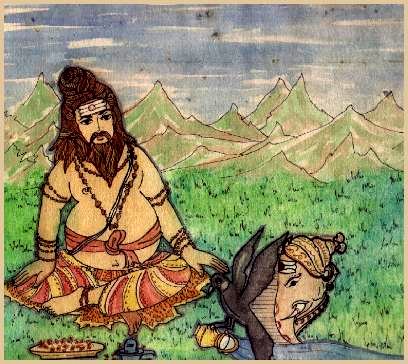 The river was named Kaveri, which signifies that where it flows, the land would be fertile (according to the Tamil Language). Kaveri originates at the Talakaveri range in the Western Ghats and is one of the Sapta Sindhus in our Hindu scriptures. It is the third largest river after Godavari and Krishna rivers in the South and makes the lands of Karnataka and Tamil Nadu fertile with its eight tributaries before it joins the Bay of Bengal.