There is no word which can exactly define or measure the loyalty which Lakshman had for Shri Ram. For Lakshman, Shri Ram was his father, mentor, friend, guide and support. Right from his childhood, he devoted his life to the service of Shri Ram. Lakshman shared all his life with Shri Ram, but the sharing was not that of comforts and desires and wealth, but of love, responsibility and care. This was not for the sake of Shri Ram being the elder one, but with a belief and trust that Shri Ram meant the world to him. 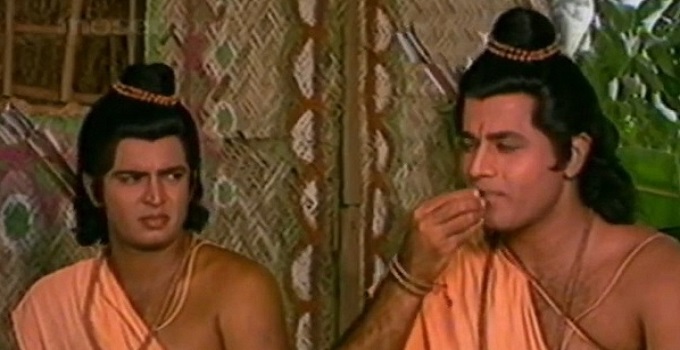 Sharing happiness – Lakshman’s accompaniment along with Shri Ram when Rishi Vishwamitr takes them along with him is a beautiful example that both the brothers were never separated and together all time. In the ashram of Rishi Vishwamitr, Lakshman takes care of all the needs of his brother. In Mithila, both the brothers enchant the people by their noble behaviour and charm. When Shri Ram and Mata Sita meet for the first time, Lakshman immediately understands their love for each other and encourages Shri Ram to win the challenge of Maharaj Janak.

Lakshman was such a confidant to Shri Ram that Shri Ram shares his feelings of love on Mata Sita with Lakshman and none else. He serves the position of a true friend in whom one can confide everything.

Sharing difficulties – Life seems good in times of celebrations and festivities, but the true test of a relation is in times of adversities. With total loyalty, Lakshman sacrifices all his comforts, personal life and requests Shri Ram to take him along to the forest. Lakshman could have stayed back and enjoyed the comforts of a prince as he was never exiled, but he chose to be with Shri Ram and took the greatest responsibility of servitude of his brother. With the doubt that sleep might intervene his duty of protection, he forgoes sleep completely for the period of exile, which shows the pinnacle of his loyalty in times of difficulties.

Sharing pain – After his coronation as the King of Ayodhya, Shri Ram decides to crown Lakshman as the Yuvraj, Lakshman politely refuses and requests that Bharat be crowned instead. This shows his pure loyalty not only towards Shri Ram, but also for Bharat. He doesn’t hold any position, but never steps back on his responsibilities. He once again becomes the support of Shri Ram when Shri Ram yet again is separated from Mata Sita and takes all care and pain to bring his brother back on his responsibilities. This unconditional support from Lakshman makes Shri Ram work on his path of Dharma with his duties as a king.

Sharing responsibilities – Lakshman’s loyalty is not just confined to Shri Ram, but the entire Ayodhya. This is seen when Yamraj comes for a discussion with Shri Ram to request him to come back to Vaikunth Dhaam. On the request of Yamraj, Shri Ram orders that who enters the chamber would face death penalty, but Rishi Durvasa arrives at the door. Lakshman who was guarding the door requests to wait, but the sage gets ready to curse the entire kingdom. Lakshman knowing that this will lead to distress decides to sacrifice his own life and enters the chamber. Shri Ram is devastated that Lakshman has to face punishment, but Lakshman displaying most loyal servitude enters River Sarayu and reaches Vaikunth Dhaam as Sesh Naag and waits for Shri Ram to return as Bhagwan Vishnu so that he could resume back his servitude towards his master.