Hanuman does his job perfectly in accomplishing his tasks in Lanka. After meeting Mata Sita, he goes a step ahead and decides to bring down the strength of the enemy. Single handed, he kills few of the powerful warriors of Lanka, sending a message regarding the strength of the Vanar army under the leadership of Sugriv. 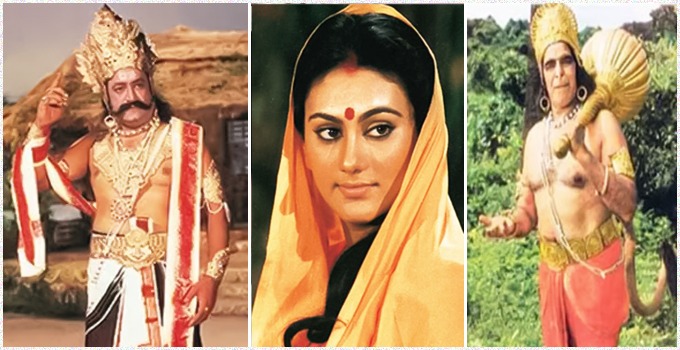 Hanuman confronts Ravan in his court and warns him to return Mata Sita to Shri Ram. Ravan gets into a fit of rage and orders Hanuman to be killed. But, Ravan’s noble brother Vibhishan stops him and mentions that scriptures forbid killing of a messenger. But Ravan insisting on punishment asks the demons to burn Hanuman’ tail as the tail is considered the dignity of a monkey. The demons wrap bundles of cloth on Hanuman’s tail. The mighty warrior decides to have some fun here and he starts increasing the length of his tail. The more the cloth they wrap the more he increases the length. Then finally the demons pour oil onto the tail. Then, on the orders of Ravan they take him into the streets of Lanka where the people mock and chide him that he is getting burnt.

A person blinded with arrogance is blinded to the consequences of the actions too. Hanuman while roaming in the golden city notices all the important places of Lanka and decides to burn them all. The demons lit his tail and all start laughing at his burning tail. Few demoness go to Mata Sita and mention about Hanuman’s state and mock her. Mata Sita gets worried and prays to Agni Dev to keep Hanuman cool.

Suddenly, Hanuman senses a cooling effect on his burning tail and he understands that it is because of the grace of Shri Ram and Mata Sita that the fire is not harming him. With great prudence he first enlarges himself equal to a large mountain and then immediately into a minute form and breaks free of his chains. Bustling with energy and swiftness, he jumps from one roof top to other and starts burning down Lanka. Hanuman looks like a terrific form of the Sun God blazing with fire to the demons of Lanka and all start running hither and tither.
Except for the abode of the noble Vibhishan, Hanuman spares no house, palace, road or street. Ravan’s palace which resembles Mount Meru is burnt down to ashes and along with him the houses of rest of all the great warriors of Lanka. The people of Lanka lose their wealth, houses, kith and kin and above all their spirit. They see the fire consuming Lanka like millions of blazing hot suns and they fear Hanuman as the God of Death itself. 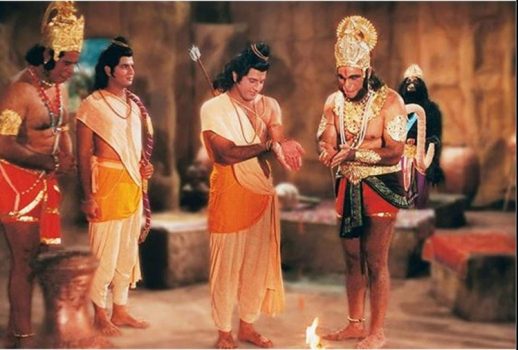 After burning the city to the ground, Hanuman stands on Trikut Mountain and looks at it feeling satisfied with his work. He suddenly remembers and worries about Mata Sita‘s safety and rushes to her, but is delighted to see that she is not harmed by the fire and is safe. He assures her of their return soon and starts his return journey back to Shri Ram with all his tasks successfully accomplished.

The Lanka Dahan more significantly is the fires of arrogance and sins of Ravan which engulfed the golden city. Lanka Dahan is the greatest lesson to mankind that one burns in their own ego and get engulfed by the flames of their own arrogance, and hence the more far they are kept, the better life is.