It is a well-known saying that what we give and do what we get back in return. It is hence necessary to be good so that if anything has to come back in return for the same, it will be good. However, one behaves in an opposite way, the result too is unfavourable. The Ramayan is the perfect illustration of these two aspects in the form of Shri Ram and Ravan. While Shri Ram worked his way to do good and came to be known as the Maryada Purushottam, Ravan was quite the opposite that his arrogant behaviour only led to the end of the entire clan.

When Ravan abducted Mata Sita and kept her captive in his golden Lanka, little did he knew that Mata Sita’s grief would burn down Lanka one day. The moment a grief stricken Mata Sita had entered Lanka as a captive, the countdown for the glory of Lanka had begun and it took shape through Lanka Dahan by Hanuman. But, the real fact here is Lanka burnt in its own fire which was because of the arrogance of Ravan. 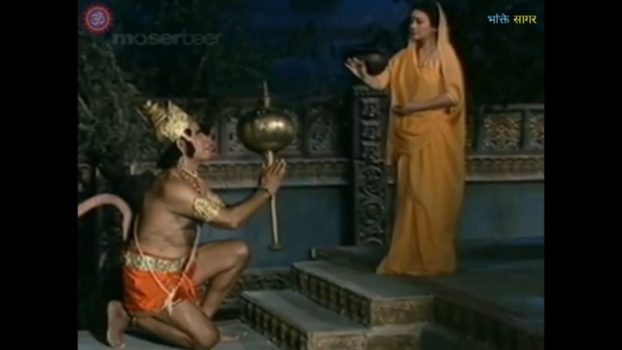 As Shri Ram’s messenger, Hanuman gives an example of what happens when the virtuous man like Shri Ram is troubled. A virtuous person is never afraid to face the consequences and faces them daringly, instead of escaping from them. Being as virtuous as Shri Ram, Hanuman does the same once his job of meeting Mata Sita is completed successfully.

Hanuman destroys the Ashok Vatika to assess the strength of the enemy and strike the first blow on the enemy. He was single handed, but enough for the unjust demons. With immense faith of Shri Ram and using his might, he sends a message to Ravan that his warriors were not fighting a mere monkey, but one of the Ekadasa Rudras.

He becomes a captive to Indrajeet by his own will as he wanted to create the first fear of Shri Ram in Ravan’s mind. In Ravan’s court, Hanuman advises Ravan on returning back Mata Sita with honour and save his life and clan, but Ravan is blind to good counsel in his arrogance. He brags about his boons from Brahma ji and Bhagwan Shiv not realising that their boons won’t be of help to him on a path of Adharma. Adding fuel to the fire, he orders Hanuman’s tail to be put to fire and tries to insult the noble one by parading him in the streets of Lanka.

A person blinded with arrogance is blinded to the consequences of the actions too. Hanuman while roaming in the golden city notices all the important places of Lanka and decides to burn them all. Once the tail is put to fire, Hanuman starts to burn the golden city known for its magnificence and prosperity. Including Ravan’s palace which resembled the Mount Meru, the entire Lanka burns to the pride of Ravan who could not differentiate between right and wrong. The only house which Hanuman spares is that of Vibhishan who was saved for his righteous conduct.

Lanka Dahan is a lesson of what should be avoided in life lest there is no life left. Hanuman demonstrates to Ravan that it was Ravan’s own arrogance that he underestimated the power of Shri Ram and was blinded to ego. When arrogance reaches its peak, it perishes in a fire lit by its own deeds.