Getting the blessings of the Almighty is a great thing, but having the Almighty Bhagwan Vishnu as a protector is a priceless boon. This priceless protection was given to the righteous king Maharaj Ambarish who had the Sudarshan Chakr guarding him always from any kind of adversity and this was a boon given for his humility and pure devotion and nothing else. 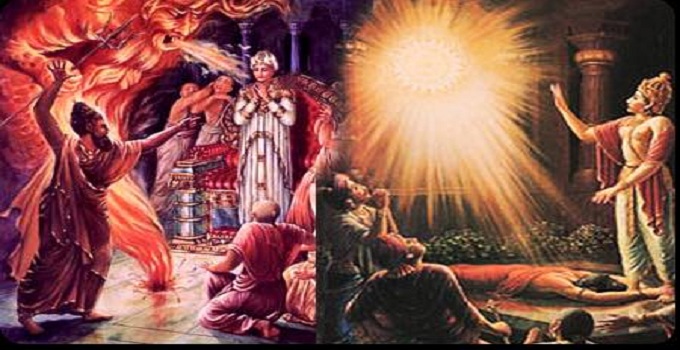 The Bhagavata Puran, mentions about his devotion on Bhagwan Vishnu. Being a great devotee of Bhagwan Vishnu, he performed many sacrificial rites. Pleased by his devotion, Bhagwan Vishnu granted him the protection of his Sudarshan Chakr that it would come to him whenever Ambarish called it for.

Maharaj Ambarish observed the Dwadshi Vrat which is considered to be the favourite of Bhagwan Vishnu. The Vrat required observing a fast on Ekadashi and breaking it on the auspicious day of Dwadashi. Once just as Ambarish was about to break the fast, Rishi Durvasa came to visit him. Ambarish duly welcomes Rishi Durvasa and requests him to be his guest for the day. Rishi Durvasa agrees and goes for a bath in the river. A long time goes, but Rishi Durvasa does not up. The auspicious time to break the fast was running out and the king gets worried. The wise Brahmins advise him to take a sip of water and break it so that the fruits of the fast would be retained.

Suddenly, Rishi Durvasa who was known for his short temper, arrives and rebukes Ambarish for not waiting for him and takes his breaking the fast as an insult to him. Although Maharaj Ambarish tries to convince him that he had taken only a sip of water so that the fast would not be violated, Rishi Durvasa does not listen and with a strand of his hair creates a demon named Krtya to kill Ambarish. Ambarish immediately calls for the help of Sudarshan Chakr. The great discus immediately arrives at the spot and kills the demon and starts chasing Rishi Durvasa.

Rishi Durvasa runs for his life all over the world, but the Sudrashan Chakr chases him everywhere. In fear of his life, he approached Brahma Ji and Bhagwan Shiv for protection, but both of them expressed their inability to help him. Helpless, Rishi Durvasa approaches Bhagwan Vishnu to call off his weapon. Bhagwan Vishnu says that he was bound by the devotion of Ambarish and only Ambarish had the strength to recall it back. Rishi Durvasa realises the power of devotion at that point and all his arrogance subdues.

The entire sequence of events happen for a year and the pious king patiently waits for the Rishi and the Chakr to return without having any food. Rishi Durvasa falls on the king’s feet and requested him to protect him from the Chakr. The noble king forgives the rishi and requests the Sudarshan Chakr to return back to Bhagwan Vishnu. Rishi Durvasa feels relieved and accepted Ambarish’s hospitality. It is only after Rishi Durvasa ate, that Maharaj Ambarish too had his meal. The pious MahAraj Ambarish teaches us that one need to exhibit great power and might to show himself as great, but just believe in the faith of Almighty which is greatest than any power and God himself becomes the strength and protector of such people.