There is much to learn from the devotee of Bhagwan Vishnu, Rantidev. His life stands as an example that humanity is the greatest virtue to be practised by one and all, and also how it makes one closer to the Almighty. 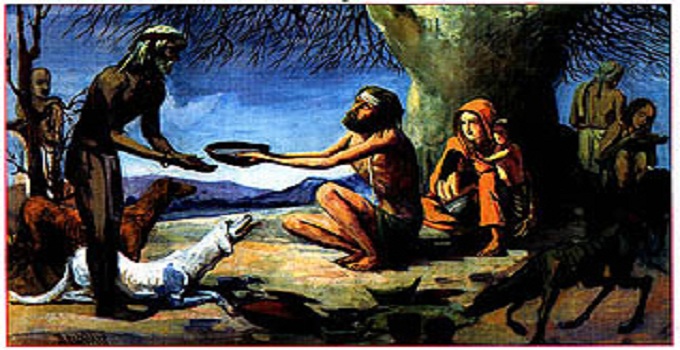 Then Brahma creates a great famine in Rantidev’s kingdom. People suffer without rainfall, food and water. Rantidev sees that all the palace granaries and food reach all the people and they are not hungry. Day after day, Rantidev gives away all his wealth, riches and even food to his people and he is left without food for forty eight days. Yet he believes in Bhagwan Vishnu and remains calm going on with his duty as a king.

After forty eight days, the ministers of Rantidev manage to get a small vessel of porridge for the king and ask him to eat it. Just as the king was about to eat it, a poor man comes to the king and asks for food. Rantidev gives half portion of his porridge to the poor man. When he is about to eat the remaining portion, another poor man comes and collapses in front of him. Rantidev immediately gives his remaining portion of food to the dying man. The man eats it and thanks him for saving his life.

With only water left, the ministers ask him to drink it at the least. When Rantidev is about to take a sip, a man comes with his dogs to Rantidev and asks water for his dogs. Without any hesitation, Rantidev offers the water to the untouchable too, but the man hesitates and says that he is an untouchable.

Rantidev comes near the untouchable man and says that all are equal in the eyes of Bhagwan Vishnu and that he sees the image of Bhagwan Vishnu in the Chandala. Rantidev mentions that there are no differences between any living creature and all have misery and joys in the same way. It is the greatest duty of a human birth to take care of the needy and as a king, it is his prime responsibility to see that his subjects never go hungry and offers his water to the untouchable and his dogs.