The purpose of Shri Ram’s incarnation gets fulfilled with Ravan’s death. All rejoiced and everybody praised the valour of Shri Ram. Known for his virtue of humility, Shri Ram humbly says that the victory over Ravan was possible because of the combat of the monkeys, the wise advice of Vibhishan, the support of Sugriv, the loyalty of Hanuman and the affection of Lakshman. He duly praises all of them for their contribution and thanks them profusely. 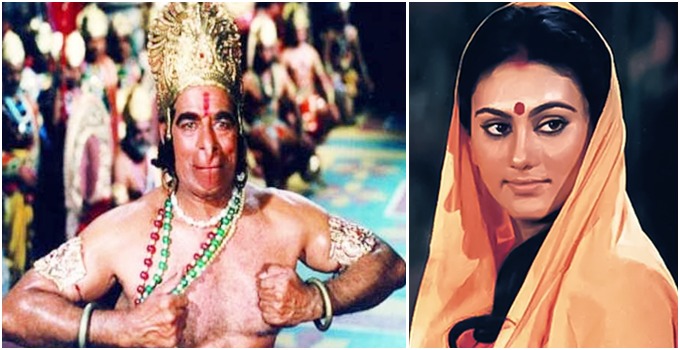 Seeing all the queens of Ravan lamenting over their husband’ death, Shri Ram asks Vibhishan to console them and perform the final rites of his brother. Vibhishan mourns the death of his brother, but Shri Ram pacifies him and reminds him of his final duty towards his brother. Vibhishan duly agrees and go into Lanka and performs the oblations to Ravan according to scriptures. On the order of Shri Ram, Lakshman then consecrates Vibhishan as the king of Lanka. The people of Lanka rejoice and thank Shri Ram for bringing back peace and prosperity back to the kingdom.

All are rejoicing in the new celebrations, but Shri Ram‘s mind is fixed on the thoughts of his beloved Sita. He yearns for her, but adheres himself and keeps his calm and waits for the right time to get her with due honours.

Crowned as the king of Lanka, Vibhishan comes to meet Shri Ram. Shri Ram then sends Hanuman, with the approval of Vibhishan to Mata Sita. Ravan had abducted Mata Sita and bought her to Lanka with deceit. In Lanka, she was ill-treated and kept captive in the Ashokvan. Thus Shri Ram feels it is only right that she is bought back to him with all due honour from the same people of Lanka. This shows the respect he had for womanhood and also how he expected that all follow the same.
Shri Ram first sends Hanuman to give her the message of their victory over Ravan. When Hanuman approached her in the Ashokvan, he saw her under the same tree and surrounded by the female demons. He bows to her and gives her the news of Shri Ram’s victory over Ravan and that her days of sorrow have come to an end.
Mata Sita is speechless with this news. She slowly composes herself, and speaks very fondly to Hanuman. She mentions that she has never indeed listened to a happier news than this and she has nothing to give him in return for such a news. Hanuman falls at her feet and says that it is only Mata Sita who can speak such virtuous words. He then says that he would kill all the female demons who ill-treated her during her captivity. But Mata Sita who was as kind and compassionate as Shri Ram told Hanuman that they were only doing their duty as told by Ravan.

Mata Sita mentions that a noble person does not take into account the deeds of the servants which were done on the order of their master and forgives them for their offences. Kindness is to be shown on such people as there is none who committed a mistake. Hanuman gets immensely delighted by her words and asks her to bless him with their eternal devotion. Mata Sita says that it was always Hanuman who kept her hopes alive in Lanka and grants him a boon that he would be blessed with Shri Ram’s eternal love and always carry a special place in their hearts forever.