The Almighty is the compassionate one who responds to even a small offering of worship done with a pure, steady and a selfless mind. A devotee never wishes anything from God, but instead tries to do everything for God. But then, there are few who take advantage of the good given to them and bring upon their own doom. One such story is of Vrikasur, which teaches us that any benefits begotten by the blessings of the Almighty and life are not to be used for greed and selfish means. 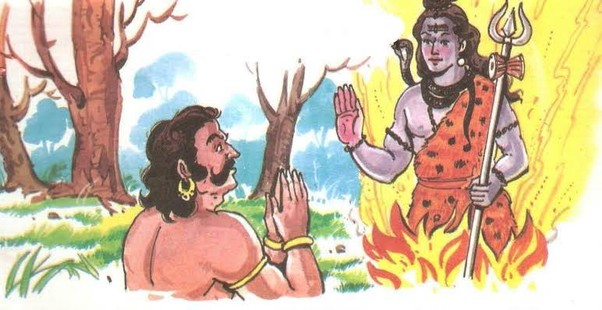 Once upon a time, there lived a demon Vrikasur, who wanted to get great powers for himself, but was not ready to work hard for it. Once Rishi Narad comes to him, and Vrikasur asks him who out of the Trinity were easy to please and give boons quickly. Rishi Narad understands the wicked demon’s plans and decides to teach him a lesson through Bhagwan Vishnu. But he innocently mentions to Vrikasur that Bhagwan Shiv was the easiest one to appease. Listening to this, Vrikasur decides to appease Bhagwan Shiv.

With the penance of Vrikasur, Bhagwan Shiv appears in front of him and asks Vrikasur for a boon. As Vrikasur wanted to become the most powerful even more than the Trinity, he asks for a boon wherein one would burn to ashes if he put his hand on their head. Bhagwan Shiv is shocked at this greedy boon, but as he had promised already, bestows Vrikasur the same. But, instead of being thankful to Bhagwan Shiv, Vrikasur decides to test his boon and tries to put his hand on Bhagwan Shiv’s head.

Bhagwan Shiv is shocked at this ungrateful gesture, and starts running away to escape the wrath of Vrikasur.He goes to Bhagwan Vishnu and explains him the situation. Bhagwan Vishnu decides to end the demon and transforms himself into a Brahmin and goes to Vrikasur and asks him what was bothering him.

Vrikasur answers that he was searching for Bhagwan Shiv and explains him the boon given by Bhagwan Shiv to him. Hearing to this, the Brahmin starts laughing uncontrollably. Vrikasur gets angry and asks him he reason. The Brahmin replies that Vrikasur was being just a fool and questions that how could Vrikasur believe that Bhagwan Shiv would grant him such a powerful boon which would make him powerful than the Trinity. The Brahmin also mentions that because Bhagwan Shiv knew that he had given a false boon that he ran away, but not out of fear of the demon. Vrikasur falls in doubt listening to the words of the Brahmin.

Seeing that Vrikasur has fallen for his words, Bhagwan Vishnu in the form of the Brahmin asks the demon to try out the boon for himself whether his power was real or not. In a fit of foolishness and mistrust in Bhagwan Shiv, Vrikasur decides to test the boon, and hurriedly puts his hand on his head without a second thought. As soon as he does that, Vrikasur gets perished by his own boon and burns to ashes. Bhagwan Vishnu successfully ends the demon for his greed.

This story has a simple, yet great insight that one cannot reach the Almighty in shortcuts, and also one needs to be grateful to the Supreme Being for giving us what we have and never take his benevolence for granted.