Shri Ram believes when one stands for Dharma, nothing is impossible. On the advice of Sagar, the task of building a bridge of 100 yojanas on the unfathomed mighty Ocean begins. Shri Ram prays to Bhagwan Shiv for the successful completion of the bridge and also for victory in battle. Under the leadership of Nal, the mighty Vanar, all the monkeys immediately start to build the bridge by uprooting huge trees and mountains. The mountains of Sahya, Malaya and Mahendra get bustled with the energetic activities of the Vanar army pulling up huge trees, rocks, boulders, creepers, mud and everything needed to build a bridge. Trees of Bamboo, Palymra, Mango, Asoka and many more were bought in and thrown into the Ocean. While Nal executed the design and planning of the whole task, The King of the Ocean bore the bridge without sinking and safeguarding it as promised to Shri Ram. It was a task astonishing all the Devas and Rishis and all stood in the sky witnessing the great engineering marvel. 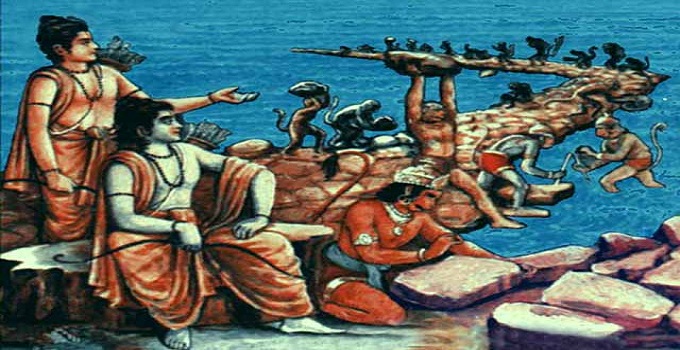 The Vanars drew strings of straight lines with creepers and tightened it till 100 yojanas. While few Vanars threw rocks and trees, few held poles of bamboo for measuring the bridge. Few bought big logs and reeds together to fasten the parts of the bridge. It was indeed a marvellous act that with the minimum means of methods and equipment, man and monkey built a bridge which nobody till date could surpass or achieve in a span of five days. Such is the power of Shri Ram and it looked like the Devas have joined hands with him in the final task of destroying the evil forces.

Completing fourteen yojanas on the first day, twenty on the second, twenty one on the third, twenty two on the fourth and finally twenty three on the fifth day, the Vanar army finished the Ram Setu. The bridge spanned for a width of ten yojanas and length of 100 yojanas.

All the celestials were filled with joy watching Shri Ram accomplish this great feat and raised slogans of victory against Ravan. Thus, with cries of energy roaring in the sky and waters, Shri Ram and his mighty army set out on the Setu to Lanka. Hanuman carried Shri Ram on his shoulders and the mighty Angad carried Lakshman on his shoulders. 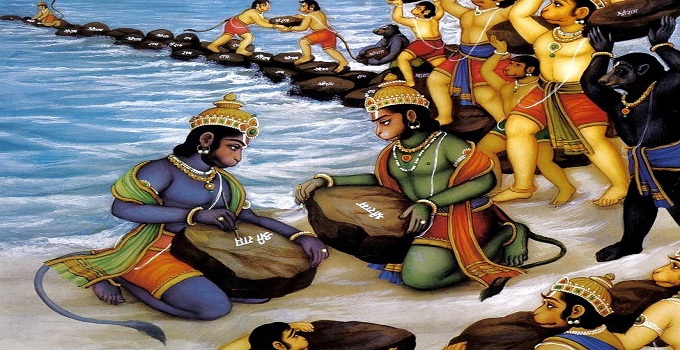 It was a magnificent sight to behold the journey of Shri Ram and his army on the Ram Setu. Some monkeys walked in the middle of the bridge, while some walked at the ends, some flew in the air shouting cheers of victory and everywhere the enthusiasm reached the skies. The rustle of the huge waves was dominated by the tremendous sounds made by the Vanar army. Vibhishan stood at the far end of the Lanka shores keeping a vigilant eye for enemy attacks while the Vanar army was crossing the ocean.

Shri Ram who was ridiculed by Ravan and his counsel as a mere hermit of the forest achieves the impossible task of bridging the ocean with confidence in himself and faith in his Vanar army. Shri Ram’s grit and determination and his unwillingness to lose to despair made it possible that the huge waters also come in tune for his task. Shri Ram proves nothing is impossible, what one needs is the resolve to achieve the impossible.