A warrior’s traits are power, strength, and skill over weaponry and knowledge of various Astras. However, the major trait which needs to be present with all of these is humility. In the absence of humility, a warrior boasts of his power and faces defeat sometime or the other. Ravan who was known as the conqueror of the three worlds failed to conquer the enemies within him, which were pride, arrogance and lust. These factors lead to his humiliation in the hands of many a great warrior. One such warrior, who subdued Ravan was the mighty Bali. 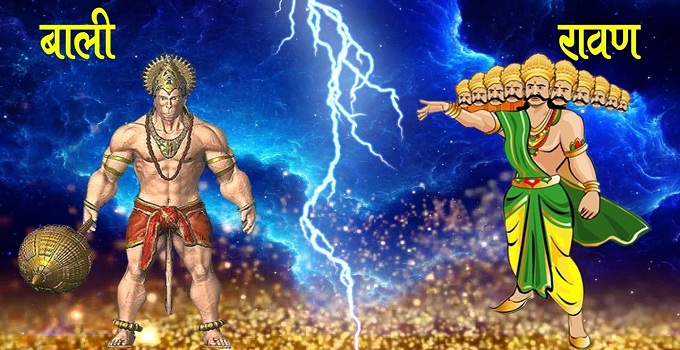 After conquering all the three worlds, Ravan started to feel proud of his powers. Once, Rishi Narad came visiting Ravan. Rishi Narad praises Bali, the king of Kishkinda for his great strength in front of Ravan and makes him feel jealous. Ravan becomes arrogant and decides to fight Bali. Ravan goes to Kishkinda where he finds Bali doing his morning meditation. Ravan challenges Bali to fight. Bali although aware of Ravan’s presence does not break his meditation. Ravan, then sees Bali’s tail and decides to make fun of the monkey warrior by pulling it and throwing him on the ground from behind. Bali understands Ravan’s intention and decided to teach him a lesson. When Ravan comes close to Bali to catch his tail, Bali immediately took a jump in the air and bound Ravan hands and legs into his tail and took off with Ravan trailing behind caught in Bali’s tail.

Bali then goes to all the four shores of the great Oceans to offer hi prayers. Ravan tried hard to release himself from the bonds of Bali’s tail, but he only got tied as bundle in Bali’s long tail. Bali finally returns to Kishkinda. Ravan becomes totally exhausted and is unable to release himself from the bondage of Bali. Seeing Ravan caught in the great monkey’s tail, all the monkeys and women folk of Kishkinda mock Ravan for his pride and laugh at him. Ravan feels humiliated that all his power is nothing in front of Bali. Ravan feels that such a powerful adversary should be made a friend and he seeks the friendship of Bali. Bali takes pity on Ravan and releases him of his bonds and accepts Ravan’s friendship.

In the later time, when Shri Ram hits Bali with his arrow while fighting Sugriv, Bali has an argument with Shri Ram. Bali says to Shri Ram instead of approaching Sugriv, he could have seeked Bali’s friendship to conquer Ravan and he would have bought Ravan at the feet of Shri Ram with his power. Shri Ram calmly explains Bali that it was not for the sake of getting back Sita that Shri Ram had supported Sugriv, but for the sake of Dharma, which Bali had failed to comply. Bali then understands the divine power of Shri Ram and asks his son Angad to always be the dutiful follower of Shri Ram. Before the start of the battle, Angad goes and warns Ravan that even Bali who had defeated Ravan was defeated by Shri Ram thus creating fear in Ravan about Shri Ram’s strength. 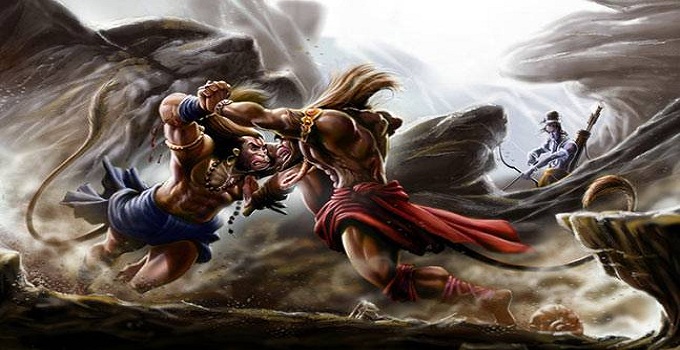 The powerful warrior never boasts of his strength, but lets his power do the talking. Ravan, although was taught this valuable lesson by Bali never realised it’s importance. He builds enmity with Shri Ram which leads to his end. Arrogance never leads to victory, the far it is, the close success is.