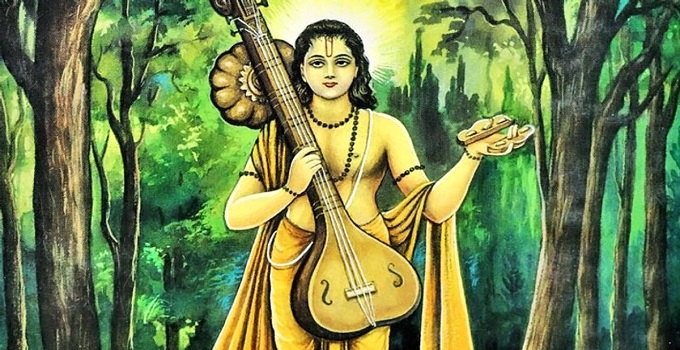 In his previous birth, Narad was a son of a maid servant who worked in a household of a brahmin. Narad grew up listening to all the stories of Bhagwan Vishnu while helping his mother in the household chores of the Brahmin. One day, Narad approaches the brahmin and asks him that where could he find Bhagwan Vishnu. The Brahmin advises that each one should seek almighty on his own. Hearing to these words, Narad goes to a dense forest and meditates on Bhagwan Vishnu for millions of years. Pleased by his penance, Bhagwan Vishnu appears in front of him and asks for a boon for which Narad seeks his devotion and nothing else. Bhagwan Vishnu then grants him to be celestial sage and sing his glories. Thus, Narad was born as the son of Brahma Ji and became a divine sage. He was granted with the divine knowledge of music to sing the stories of Bhagwan Vishnu in all the three worlds and spend his entire time in the devotion of Bhagwan Vishnu. With his divine knowledge, Rishi Narad authored a text on music named Sangita Makarand. 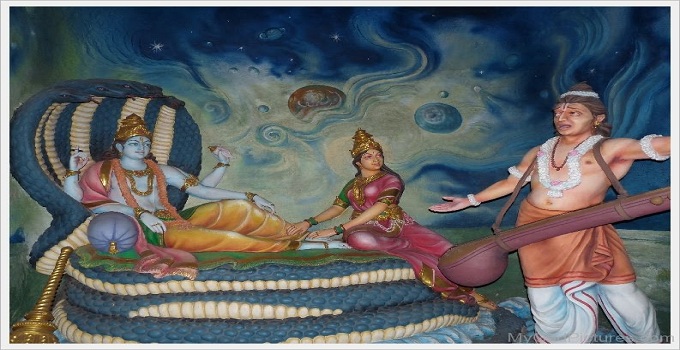 Rishi Narad was instrumental in making a thief into the great Rishi Valmiki. Later, when Rishi Valmiki was in search of an ideal person about whom he could write about, it was Rishi Narad who told him about Shri Ram, thus marking the writing of the divine epic Ramayan.

In the incarnation of Shri Krishna, Rishi Narad was his constant companion and often visited Dwaraka. During the Parijatapaharan or the Tulabhaar lilas of Shri Krishna, he enlightens Satyabhama, the consort of Shri Krishna the true manifestation of his avatar and make her realise that Shri Krishna is not just a mere human. Thus, he makes his appearances in the epics and puranas while preserving the true essence of devotion. Eternally chanting Narayan Narayan, Rishi Narad is always immersed in the bliss of devotion of Bhagwan Vishnu.