Being a righteous king to the people and subjects is one thing, and being noble to all the living beings and looking after them as his own is another virtue which makes a king different from al others. Such a king’s virtues truly represent the meaning that a king is the ruler of the earth and all living beings and the king who made this true was Maharaj Shibi. 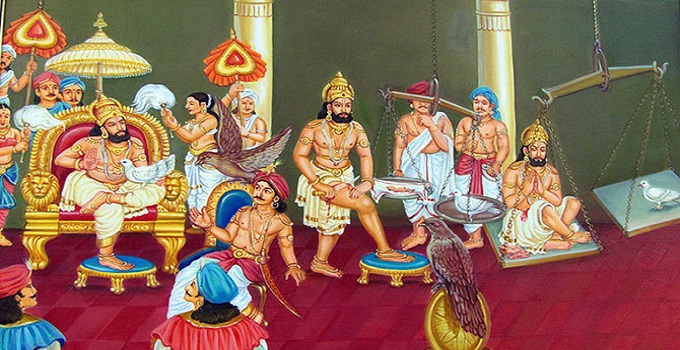 One day, when Maharaj Shibi was seated in his palace, a dove came flying and perched on his thigh. It was being chased by an eagle, the dove was trembling and it sought refuge from the king as it was being chased by an Eagle as prey for food. The King granted it protection and requested the Eagle to spare the little bird. But the Eagle refuses and says that the king is offering refugee to one bird, but in turn he is denying the food for another, and this would not be the ideal Dharma. Maharaj Shibi offers the Eagle various foods, but the Eagle says that it only eats fresh meat. Then Maharaj Shibi asks the Eagle to take his flesh.

All the courtiers are shocked on listening to this. Maharaj Shibi says that he would offer his flesh equal to the Dove, and the Eagle agrees to it. A huge balance scale was bought and Maharaj Shibi places the Dove on one scale and cuts a portion of flesh from his thigh and puts it on another. But the weight does not become equal. He cuts another part of his flesh from his body, but in no vain. Repeatedly, Maharaj Shibi cuts the flesh from all of his body and puts it in the balance, but nothing comes in equal to the Dove. All are surprised and worried as Maharaj Shibi’s was in great pain, yet does not step back. Finally, Maharaj comes and sits in the balance himself. All are surprised and shocked to see the weight of the king balances the Dove’s weight. Thus, the king gets ready to offer his life as a sacrifice for protecting the Dove.

Seeing the great courage of Maharaj Shibi, the Eagle and the Dove transform into none other than Devraj Indr and Agni dev, the fire god. Indr mentions that he wanted to test the generosity of the king and thus came in the form of the Eagle and Dove. They praise him for his undeterred courage in sacrificing his life for a small bird. They heal the King’s wounds and return to heavens.

Maharaj Shibi here exhibits two important things, One is as a king he offers protection to the Dove, and the other is he gets ready to sacrifice himself as the food for the Eagle to deprive him of hunger. This shows his noble compassion and equality for all. It is only when this equality is attained by a king that he proves himself as a Chakravarthy as all the subjects abide to his love, rather than power just as thye did for the great Maharaj Shibi.