When the battle of Lanka starts, even the celestials do their part in aiding Shri Ram in his fight of upholding the Dharma. Indrajeet’s most powerful Naagpaash is successfully countered with the help of the divine Eagle Garud, and Shri Ram and his forces are back on the battlefield with renewed energy. 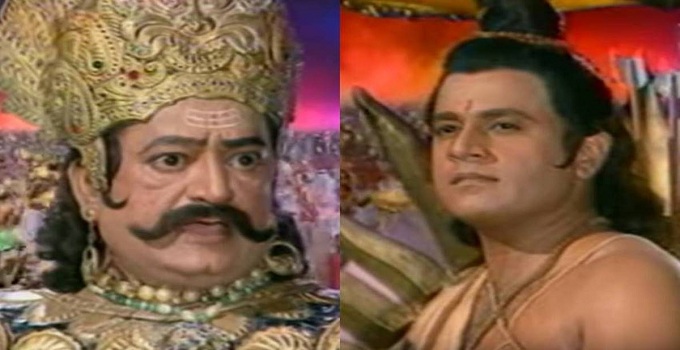 With Shri Ram and Lakshman coming back, the demons of Lanka who were filled with temporary delight are surprised with cheers of victory from the monkey camp. Fear grips them back, but having no choice ahead, they start the war again. Ravan sends his powerful commanders Dhumraksh, Vajradousht and Akampan, all who are killed by Angad and Hanuman. Ravan sends his youngest son Prahast, but he is killed by Neel, and Ravan loses one of his powerful son and warrior.

Filled with grief and anger by the death of Prahast, Ravan himself gets ready for battle. He mounts on the chariot which was harnessed with excellent horses and shone like fire. Ravan was accompanied by his vast army who were making big sounds of conches, drums, and roars. When enquired by Shri Ram as to who the warrior is Vibhishan replies that he is none other than Ravan. Shri Ram is surprised at Ravan’s radiance and says indeed he is a warrior who is fit to be punished by him. Hanuman requests Shri Ram to mount him and fight Ravan, just as Bhagwan Vishnu mounts Garud and fights the evil forces.

Mounting Hanuman, Shri Ram makes a thunderous sound with his bow which creates tremble in the enemy camp. For the first time, Shri Ram and Ravan confront each other. Shri Ram challenges Ravan that the time has come where Ravan can no more flee from him there is no place where he can seek refuge in the three worlds.

Hearing the words of Shri Ram, Ravan in great anger strikes arrows with the speed of wind on Shri Ram, but Shri Ram breaks them all with great vigour. Ravan strikes another set of arrows on Hanuman who is carrying Shri Ram and wound him. Seeing his dearest devotee hurt, Shri Ram gets furious and shatters Ravan’s chest with a powerful arrow which has the strength of the thunderbolt. Then Shri Ram strikes continuos arrows shattering Ravan’s chariot, his staff, bow and arrows, weapons, kills Ravan’s charioteer and finally Ravan’s crown in a whiff of a lightning before Ravan even understands what is happening with him.

Ravan is left weapon less, without a chariot and is brought down to ground without any support. The demon king whom the three worlds fear gets shaken by Shri Ram’s arrow. The demon who ridiculed Shri Ram as a mere hermit is at the mercy of Shri Ram.

Shri Ram smiles looking at the great warrior’s plight and says that he wouldn’t kill an enemy who has been deprived of weapons. He sees Ravan tired and weary and asks him to return back to his city and come back the next day with renewed with energy. Ravan shocked by Shri Ram’s gesture returns back to Lanka, humiliated and defeated.

Shri Ram by this gesture shows to the world how rightful a warrior he is. Even though having all the chance to kill Ravan and end the war, Shri Ram respects the rules of warfare and does not kill the unarmed enemy. But, by leaving him alive, he shatters the ego and pride of Ravan leaving him as good as dead.