The two names which fill the heart with happiness and bliss are Siya and Ram. It is said, that marriages are made in heaven, but to make Earth a heaven, this divine couple was born. 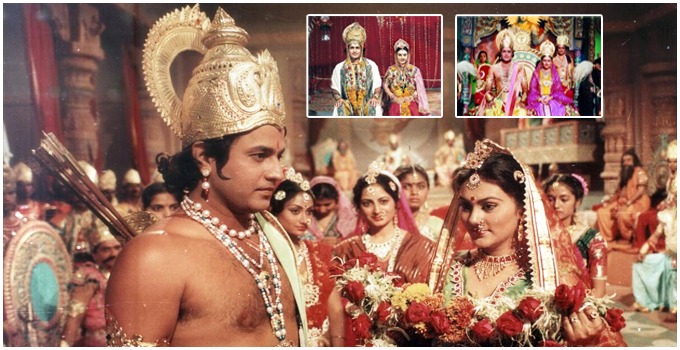 Even though divine incarnations of Bhagwan Vishnu and Bhagavathi Lakshmi, they went through all pains and pleasures as humans and set an outstanding example for the relation of husband and wife. Both were special and born as a result of the Yagn Phal. Shri Ram was born after Maharaj Dasarath performed the Putrakamesthi Yagn and Devi Sita was born from Mother Earth, when Maharaj Janak was ploughing the field during a Yagn. Shri Ram was the dearest son to Maharaj Dasarath and so was Devi Sita to Maharaj Janak.

Devi Sita grew up to be the most beautiful maiden and enchanted all the three worlds. Maharaj Janak was worried about her marriage as he knew that she could not be married to a normal person. Once, he happens to see Devi Sita playing the ball game along with her sisters. The ball rolls over under the box in which the Shiv Dhanush was placed. Nobody till date could move the Shiv Dhanush, and her sisters wonder how to take their ball. Devi Sita smiles, and with ease, pushes the box and takes the ball under it. All are astonished with her strength and so is Maharaj Janak. With this incident, he gets a divine inspiration to and takes a vow that he would give Devi Sita in marriage to the person who could not only lift the Shiv Dhanush, but string it too.

In the Swayamvar, all mighty warriors including Ravan try to lift the Shiv Dhanush but cannot budge it. Then on the command of Rishi Vishwamitr, Shri Ram steps ahead to win his beloved Devi Sita. All wonder as to how would such a delicate and a handsome prince lift the bow, when mighty warriors could not move it. But Shri Ram with simple ease lifts the Shiv Dhanush and breaks it too. Maharaj Janak is overjoyed that Devi Sita has got her perfect match. The marriage of Shri Ram and Devi Sita is performed with great pomp and splendour. Thus, the divine couple unite with each other and win the hearts of all as the most delightful and respectable couple.

Not only in happy times, they stood for each other even in difficult times. Devi Sita accompanies Shri Ram to the forest and endures all situations along with Shri Ram. When they get separated, Shri Ram is so distressed and gets ready to destroy the whole world, but Lakshman comforts him and they start their search for Devi Sita. Shri Ram walks from one forest to other, spends day and night in her thoughts but, never loses hope to find out her whereabouts. Devi Sita waits anxiously for Shri Ram and goes through all pains with a single hope that she would be united once again with Shri Ram. Shri Ram’s love for Devi Sita makes him reach Sugriv and Hanuman. With their help, he finds out about her captivity in Lanka, bridges an ocean and reaches Lanka. Shri Ram kills Ravan and gets his Sita back and they are united once again. Their love was endless and infinite. They thought as one heart, they thought as one mind and they breathed as one soul. They were befittingly born for each other and as an embodiment of steadfast love.