The Guru of all Gurus, Rishi Ved Vyaas is the first Acharya and the teacher of our Sanatana Dharma. Rishi Ved Vyaas has contributed to the very foundations of our Sanatana Dharma and given us a lead to live life following our culture and traditions. It is in the honour of his birth on the Purnima of the Ashaad Month, that Guru Purnima is celebrated. 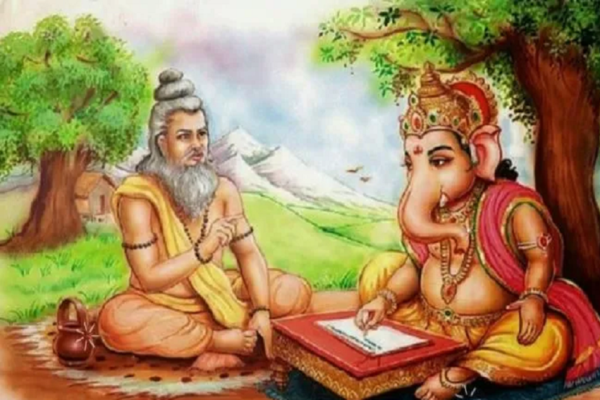 Rishi Ved Vyaas was born to Rishi Parashar and Satyvathi. Satyavathi was a fisher woman who ferried people across the River Yamuna. Once, Rishi Parashar comes to the bank and gets smitten by the beauty of Satyavathi. Satyavathi agrees to his desire and it was because of their union that a son was born to them. Blessing the son and mother, Rishi Parashar left on his own way. As he was born on an island (dwipa) and his body colour was black (krishna), he was named Krishna Dwipayan. Being a persona of extraordinary birth, Krishna Dwipayan immediately sought permission from his mother to pursue penance and gain knowledge with a promise that he would appear in front of her whenever she remembered him. After receiving tutelage under his father and the great rishis Vasudeva and Sanakadik and doing great penance on Bhagwan Vishnu, Krishna Dwipayan classified the Vedas into their four divisions, and hence he was called Ved Vyaas (the classifier of the Vedas)

Believed to be a part of Bhagwan Vishnu himself, Ved Vyaas was the very reason for the lineage of the Pandavas and the Kauravas to flourish and progress ahead. When King Vichitraveerya died without any progeny, Satyavathi called for her son Ved Vyaas and asked him to help the queens become mothers so that the lineage of Maharaj Shantanu would continue. Thus, Dhirtarashtr, Pandu and Vidur were born. Rishi Ved Vyaas also was the father of the great sage Shuka who later narrated the entire Bhagavat Puran to the dying king Parikshit.

Not only helping the lineage progress, Rishi Ved Vyaas penned down this eternal epic of his own lineage as Mahabharat with the help of Bhagwan Ganesh. When Bhagwan Ganesh put a condition that the narration of the Rishi should not stop at any point of time from the start to the end, Rishi Ved Vyaas agreed and successfully fulfilled the condition. With Eighteen Parvas, the Mahabharat stands as the greatest epic of our Sanatana Dharma teaching what to do and what to avoid in life. The Bhagavad Geeta discourse given by Shri Krishna to Arjun is mentioned in the Bhishma Parva of the Mahabharat.

Feeling immensely happy for the successful completion, Bhagwan Ganesh blessed Rishi Ved Vyaas with immortality for his knowledge to always be present in his form in all times. It is believed that even till date Rishi Ved Vyaas meditates in a cave in the Northern India. Rishi Ved Vyaas is also the author of the 18 Puranas and the Upanishads.

Rishi Ved Vyaas acknowledging all his knowledge to Bhagwan Vishnu’s gratification described that most important goal in one’s life is to attain and realise the Narayan Tatva and lead life with devotion on Bhagwan Vishnu. For giving us our great foundations of our Sanatana Dharma, Acharya Ved Vyaas is worshipped on the Ashad Purnima known as the Vyaas Purnima or the Guru Purnima and all the students pay respects to their gurus as all the gurus who believe in spreading knowledge for a righteous life are a reflection of Acharya Ved Vyaas.