Often we hear of stories of heroes saving the world with their great valour and strength. These heroes are hailed to be born for the purpose of protection of Dharma. However, it is never a single handed fight of the heroes and they get help from all sources, big and small for their goal to be accomplished. Falling into this genre are the Vanar architects Nal and Neel who not only supported Shri Ram’s mission for Dharma, but were also acknowledged by him for making the impossible, possible through their skill. 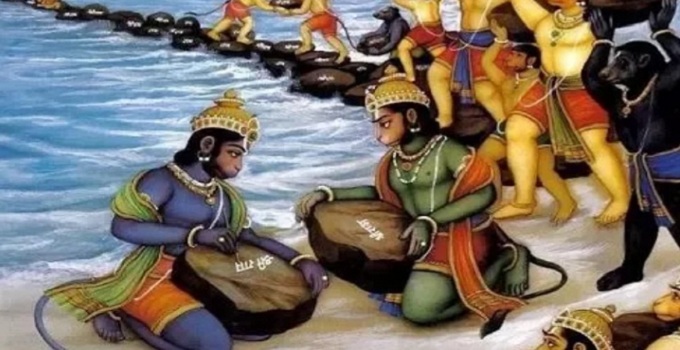 Nal and Neel were the chief commanders of Sugriv’s army, and were known for their wisdom and war skills. Apart from this, they also had a special skill of being the architects too. Nal was the son of the divine architect Vishwakarma and Neel was the son of Agni Dev. In their childhood, they were a naughty duo and always threw away the belongings of the Rishis into the water. The Rishis got displeased and cursed Nal and Neel that whatever they threw would float in the water. This curse turned out to be a boon in the mission of Shri Ram crossing over the Ocean to reach Lanka.

When Shri Ram reached the shores of the Ocean, he was faced by the challenge of crossing the fathomless ocean with his huge Vanar army. He first prayed to Samudra Dev to grant him way across the ocean, but when the Ocean King did not respond, Shri Ram was furious and engaged the Brahmastr to dry up the entire ocean. The entire World shook and Samudra Dev came rushing and fell at the feet of Shri Ram. He then mentioned that giving way would be going against the rules of creation, and suggested building of a bridge across the ocean. Shri Ram was surprised at this and wondered as to how that would be even possible.

Then Samudra Dev names Nal and Neel as the architects who can make this possible and also mentions their curse which would help the stones stay afloat in water. Shri Ram is immensely pleased with this and gives the responsibility of the mighty task to be successful to Nal and Neel. Humbled by the order of Shri Ram, Nal takes the position of the chief engineer plans the construction of the bridge while Neel supervises the whole work. The engineering skill used in this construction was beyond measure. Nal and Neel assigned the Vanars first to draw a straight line with the help of strings till 100 yojanas. Then great trees and huge rocks and boulders were bought by the Vanars to Nal and Neel who threw them in the water and made them float. Nal and Neel finished the 100 yojanas Ram Setu in just five days, which till date remains an unconquered wonder.

The Ram Setu broke all the barriers of Shri Ram reaching Lanka and fighting the battle against Ravan for which Shri Ram thanked them duly. Not only for their architectural skills, but Nal and Neel proved their valour too by killing great warriors of Lanka like Nikumbh, Mahodar and Prahast. Heroes are many, but the stories of unsung heroes are always due to know their silent, yet important contributions in preservation of Dharma.