A father is the one who gives one the greatest gift of life, which is birth. He not only gives birth to the human life, but is also responsible for the birth of the right ideals and the right conduct in them to follow as a human. The relation of Shri Ram and Maharaj Dasharath reflects the same attachment. Being a great Emperor, Maharaj Dasharath had achieved great fame. His four sons who shone like the four Vedas bought him endless happiness. But, he never went to spoil them as the princes of the great kingdom, instead taught them the code of conduct and made them as noble as him. 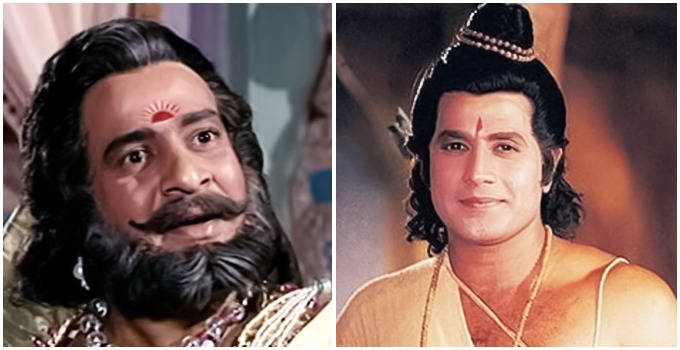 When Rishi Vishwamitr asked Maharaj Dasharath to send Shri Ram with him to kill the demons, Maharaj Dasharath is aghast as it would separate him from Shri Ram. But on the advice of Rishi Vashisth, he understands the true intention of the Rishi Vishwamitr, but with a heavy heart orders Shri Ram and Lakshman to go with him. Shri Ram obeys his father’s word and dutifully serves the Rishi in all ways and not even once goes against his father’s command in his services to the great Rishi.

Shri Ram’s followed whatever his father ordered to do him as his prime duty. When Maharaj Dasharath announces the coronation of Shri Ram, although Shri Ram is not very happy as his brothers were away at that time, still accepts his father’s wish. But the situation changes and Queen Kaikeyi forces her wishes on Shri Ram as his father’s command.

Shri Ram understanding the troublesome situation of his father’s choice between Dharma, without a slightest hesitation, comes forward and takes the responsibility of upholding his father’s dharma and agrees to his mother’s wishes. Shri Ram does not get upset about the kingdom being snatched away, but is only concerned to keep up his father’ name as a righteous person, and nothing else. Maharaj Dasharath himself advises to rebel against him, but Shri Ram doesn’t agree and he says that his father’s word is more important to him than the kingdom. Without any other thoughts, he leaves for the forest. The only request Shri Ram has for his father was to take care of his Mother Kaushalya who was grief struck with his leaving.

Shri Ram does his duty as a son, and Maharaj Dasharath displays his unending affection for his son by sacrificing his life. Unable to bear the separation of his dear son, he passes away. Shri Ram continues to keep up his father’s word even after his death, but does not break it and return back to Ayodhya. He advises his brothers to follow their Dharma in keeping up their father’s word and bring glory to Maharaj Dasharath. It is indeed, only a son like Shri Ram can say with nobility that he likes to be known as the Son of Maharaj Dasharath rather than the incarnation of Bhgawan Vishnu.