It is very less known story that there is a beautiful connection between Shri Krishna lifting the Govardhan Parvat which was originally because of a promise given to the Mountain during his incarnation of Shri Ram. This is a beautiful story as how the Almighty never forgets nor breaks his promise given and even takes a different birth to fulfil the same too.

The promise was to set to when Shri Ram was building the mighty bridge on the Sea to reach Lanka and rescue Mata Sita from Ravan. Shri Ram prays to Samudradev to give him way to cross its waters. But when there is no response, Shri Ram gets angry and mounts his powerful arrow to dry the Sea. Samudradev surrenders and then suggests to build a Setu with the help of Shri Ram’s commanders Nal and Neel, who were the sons of the divine architect Vishwakarma.

With great energy, all the Vanars uprooted mighty trees, rocks and mountains and threw them into the ocean and a bridge of 100 yojanas starts to shape up. Shri Ram’s faithful Hanuman flew on to all directions and uprooted huge mountains and put them in the ocean for the construction of the Setu.

On the final day when the bridge was almost to a finish, he flew to the North direction, uprooted a huge mountain and was returning back with it. When he reached Indraprasth, he came to know that the Setu has been completed successfully. With no need of carrying the mountain, Hanuman placed the mountain near Vrindavan and started to go back to Shri Ram, when he heard the mountain call back to him.

The mountain says to Hanuman that it felt blessed to be a part of Shri Ram’s task, but now that the bridge has been complete, it feels desolate not to be a part of it. It requests Hanuman to mention its disappointment to Shri Ram and request him to make a part of the Ram Setu. Hanuman feels happy for the devotion of the mountain, agrees to its request, goes back to Shri Ram and narrates the whole incident. Shri Ram listens to this and gets mighty pleased with its devotion. He then promises the mountain that he would make it a part of his divine lilas as the incarnation of Shri Krishna in the Dwapar Yug. Hanuman goes back to the mountain and conveys the same. The mountain feels elated and says that it will wait for that blessed moment to come. 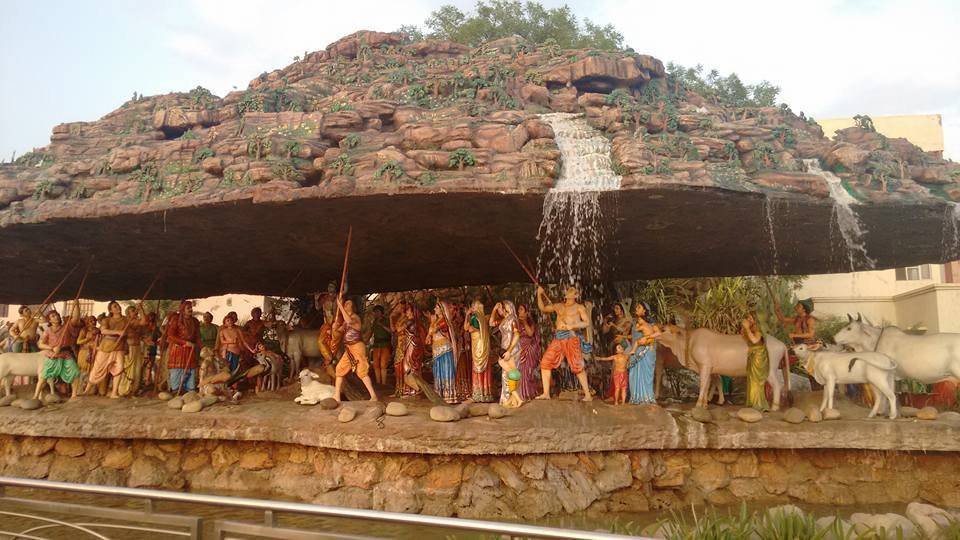