In the Kaliyuga, Bhagwan Vishnu in the incarnation of Shri Venkateshwara resides in the divine hills of Seshachalam which are famous as the Tirumala Hills. The Tirumala temple is the richest Hindu temple in the world and is considered as the Kaliyuga Vaikunth Dham by one and all. Out of the various festivals which take place in this temple, the Annual Brahmotsavam is the most prominent one which takes place during the Navaratri time. It is believed that Brahma Ji comes down to Earth and conducts this festival for nine days and is named after him.

The beauty of this festival is that Shri Venkateshwara along with his consorts Sreedevi and Bhudevi are taken on a different vehicle every day as a procession in the four main streets of the temple. The processions are named after the vehicles of the animals and birds which carry Shri Venkateshwara

First Day – Pedda Sesh Vahan (Pedda – big in Telugu) the mighty Seshnaag carries the god on the first day. Sesh Vahan also signifies the seven hills of Tirumala which are said to be his coils one which Shri Venkateshwara rests.

Second Day – Chinna Sesh Vahan (chinna – small in Telugu). The second day, the deity is taken out on the small chariot named after Vasuki. In the Bhagavadgita, Shri Krishna mentions to Arjun that among snakes, he is the Vasuki, and hence he rides Vasuki. In the evening he rides the Hansa Vahan (Swan) in the form of Goddess Saraswathi signifying knowledge. Third day – Simha Vahan – Symbolising power and strength, Shri Venkateshwara rides the Lion as the incarnation of Bhagwan Narasimha who protected Prahlad from the clutches of the demon Hirankashyapa. In the evening, he rides the Chariot of Pearls signifying a pure mind to attain his grace.

Fourth Day – Kalpavriksh Vahan – The vehicle of Kalpavriksha signifying that Bhagwan Vishnu grants all the wishes of the devotees is seen on the fourth day. The Almighty rides the Sarva Bhupala Vahana (Earth as a chariot) denoting that he is the king of all the worlds.

Fifth Day – Shri Venkateshwara comes in the form of the Mohini Avatar accompanied by Bhagwan Kirishna in the morning. The evening procession is the most important one of all the nine days as Shri Venkateshwara rides on his favourite Garud Vahan as Bhagwan Vishnu. Lakhs of devotees comes to witness his splendour on the Garud Vahan.

Sixth day – Hanumanth Vahan – In the incarnation of Shri Ram, the deity rides Shri Hanuman as his chariot signifying the bond of trust between god and the devotee. In the evening he rides the golden chariot called the Swarn Rath and also on the Gaj Vahan (Elephant) symbolising the episode of Gajendra Moksh. 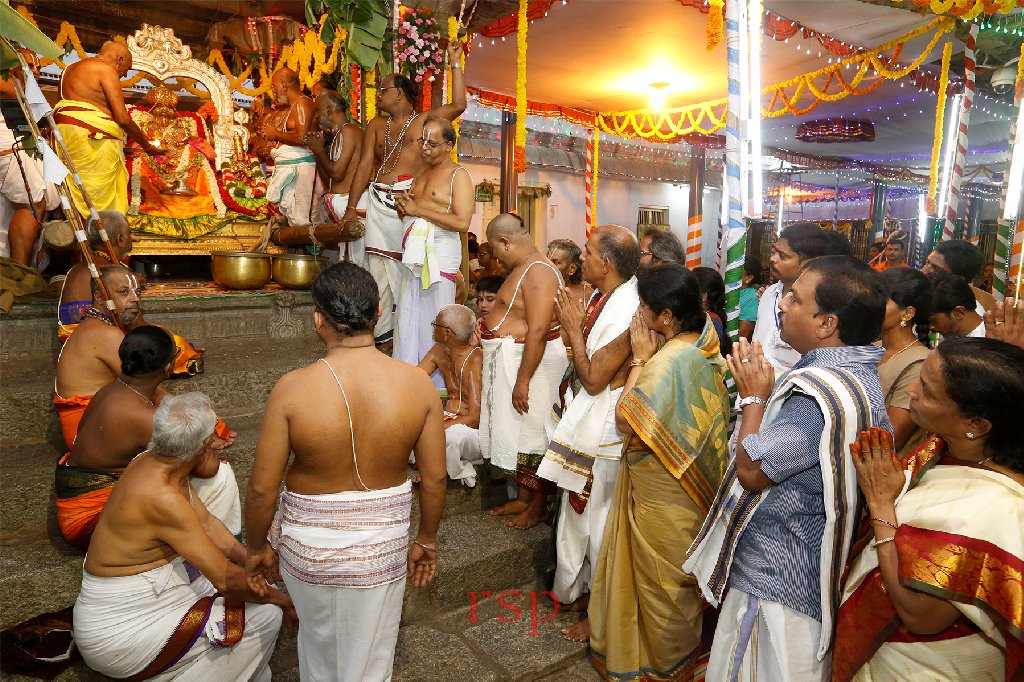 Seventh day – In the morning, Shri Venkateshwara rides the Surya Prabha Vahan with Sun as his ride and in the evening he rides the Chandra Prabh Vahana which is the moon denoting the time cycle.

Eight day – Shri Venkateshwara rides as Malayappa Swami,( Malay – hills meaning King of hills) with his consorts in a huge chariot which is pulled by the devotees themselves. In the evening he rides the Ashw Vhan (Horse) denoting his tenth Kalki Avatar. The ninth day concludes with a special bath is given to him and his mighty weapon, the Sudarshan, which is called the Chakra Snan which signifies the purification of all sins and destruction of evil.