In our Sanatan Dharma, Surya Bhagwan is the prime source of life and energy. The worship of Sun God is mentioned in the Rig Veda and this is celebrated as the Makar Sankranthi in our country. The festival celebrates the solar cycle marking the first day transit of the Sun God into the Makar Rashi (Capricorn). This marks the start of the longer days of the year. Unlike other festivals, Makar Sankranthi is the only festival which falls almost on the same date every year. 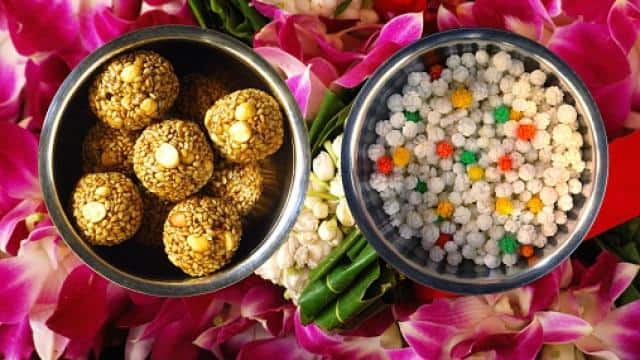 The festival is a sign of harvest coming home after a yearlong of hard work. The colours of India come out breathtakingly in this festival, where there are kites flying in the air, colourful rangolis filling the streets, fairs with lot of fun filled activities and bonfires celebrating the end of winter days. The festival includes going to holy rivers and offering prayers at the banks of the rivers to Surya Bhagwan. The Kumbh Mela which occurs every twelve years comes at the same time and attracts millions of pilgrims around the world at the holy Prayag confluence to worship the holy rivers of Ganga, Yamuna and Saraswathi along with the Surya Bhagwan.

This Pan Indian festival is a celebration of peace, being together and sharing. It is called as Maghi in Punjab. The people dance to their favourite energetic Bhangra, and eat kheer cooked in milk, sugarcane and jaggery. There are many Maghi fairs held all around Punjab.

In Rajasthan and Madhya Pradesh, Delhi and Haryana, this festival is celebrated preparing sweet delicacies. This festival is also popular as the Kite festival in Jaipur. In Tamil Nadu, Sankranthi is called Pongal. Pongal is a dish made out of fresh rice and jaggery in new pots allowing it to boil and over flow from the pot. It also is celebrated with colourful Kolams which are drawn in the front of the houses with a special rice powder.

In the states of Andhra Pradesh and Telangana, Sankranthi is celebrated as the festival of food, kites, rangolis and cattle worship. There are Hari Dasas, (men from the Brahmin community) who carry a pot over their head and sing songs of Bhagwan Vishnu while walking and balancing the pot on the head. They go from one home to other and women put rice in the pot and take their blessings. The cows are given a ritual bath, decorated and worshipped.

In Karnataka, this festival is called the Suggi. People exchange food offerings with rituals which is called as Ellu Birodhu. In Odisha, The Jagannath temple is decorated splendidly and special pujas are done to the deity. In Jharkhand, the people celebrate throwing Til seeds into the fire and eat Dahi Chuda, made out of beaten rice.

In Assam, It is called the Magha Bihu, which marks the end of the harvest. Young men erect bamboo houses and play traditional Assamese games. In Maharashtra, people exchange sweets of Til and Jaggery and women give traditional Haldi Kumkum for long life of their husbands. In Gujarat, it is majorly a Kite festival with streets filled with kites and energetic sounds of young men.

Called by many names, but traditionally and spiritually as a single festival, Sankranthi is a representation of varied colours which are spread in the beautiful rural India after a yearlong harvest comes home and a celebration of life with gratitude towards God and Nature.