The mission of destroying the evil forces of the Dandak forest starts with Shri Ram and Lakshman killing the demon Viradh. Viradh was the son of the demon couple Java and Shataprada. Viradh does severe penance to get boons from Bramha Ji. Brahma Ji grants him great powers through which he starts harassing the innocent sages and people. Viradh resembled a huge mountain and carried a deformed face. He roamed in the forest route to Rishi Sharabhang’s ashram and killed the sages who travelled in the path. 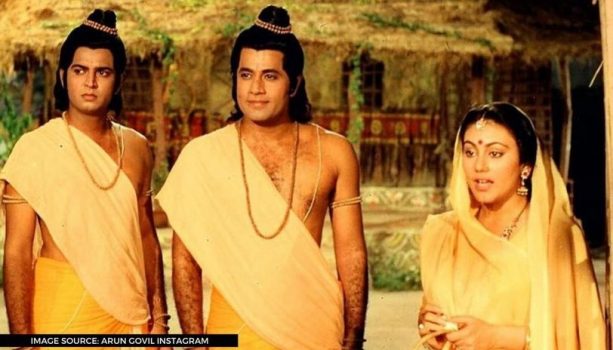 Viradh first spots Shri Ram, Mata Sita and Lakshman enroute to Rishi Sharabhangs’ ashram. He gets enchanted by Mata Sita’s beauty and immediately catches her in his grip. Then, he asks Shri Ram and Lakshman as to whom they are who dared to enter his precincts.

Shri Ram gets furious when Viradh snatches Mata Sita in his grip and asks him to leave her. Viradh boasts of his power that no one in the three worlds could defeat him. He threatens Shri Ram and Lakshman to leave Mata Sita to him and leave from there. Shri Ram and Lakshman get angry at Viradh’s retorts and start showering innumerable arrows on the demon. But, due to the powerful boons of Brahma Ji, no harm comes to the demon.

Viradh hurls his spear at Shri Ram which Shri Ram breaks into two pieces. Viradh understands that the two young princes are not simple humans. He puts Mata Sita aside and spreads his wide arms and tries to catch Shri Ram and Lakshman in both his hands. Shri Ram understands his plot and says to Lakshman to allow the demon to get hold of them and then kill him. An intelligent warrior always understands the tactics of the enemy and counters it and Shri Ram uses the right tactic on the demon. Shri Ram and Lakshman stand calmly and Viradh feels they are afraid and immediately snatches them in his hands.

Then he orders Lakshman to dig a grave and Lakshman does so. They push Viradh into the grave when he regains his conscious. Then he speaks to Shri Ram saying that he has recognised who in actual Shri Ram is and mentions his previous story.

Viradh in reality is a Gandharv who was in the service of the God of Wealth, Kuber. Once, on his way to Kuber, he sees the celestial nymph Rambha and gets infatuated on her. Lost in her charm, he gets delayed to come to the service of Kuber. Kuber gets angry on this and curses him to become a demon. When he pleads for redemption of the curse, Kuber says that Bhagwan Vishnu would come in the form of Shri Ram and release him from the curse.

Viradh then leaves his life at the feet of Shri Ram and gets liberated from his curse with the blessings of Shri Ram. He assumes his original form and before leaving to his heavenly abode guides them to the ashram of Rishi Sharabhang. Thus, the terrible demon Viradh is freed from his curse by Shri Ram.