In the mission of killing Ravan and getting back Mata Sita, Hanuman plays the significant role. For the eternal service to Shri Ram and Mata Sita, they bless him by permanently residing in his heart. Each and every aspect in the Kishkinda Kand depicts the beautiful relation of the Shri Ram and Hanuman, and how dear they are to each other.
Shri Ram is told by Shabari that Hanuman is waiting to meet his swami and Shri Ram along with Lakshman eagerly moves towards Rishymuk Mountain to meet his dearest devotee and make friendship with Sugriv. 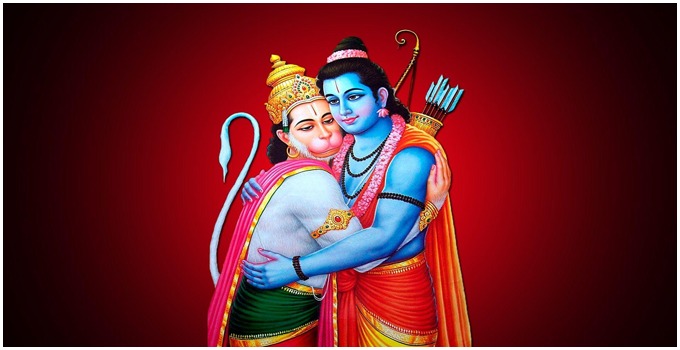 Reaching the foothill of Rishyamuk Mountain, Shri Ram and Lakshman search for the way to reach the top and meet Sugriv. In the meanwhile, at the top of the mountain, Sugriv notices them and wonders who these young hermits and look like warriors roaming in the dense jungle without any fear. He wonders whether they are sent by Bali, his brother to kill him. He asks Hanuman, his minister to go and find out their identity.

Taking the form of a Brahmin, Hanuman approaches the two brothers and bowing to them humbly asks them their identity. He praises them as the one with the colour of the cloud and the other fair, with beautiful limbs and delicate bodies. He is surprised that why they are scorching themselves in the sun and roaming around in the wild dense forest region. He wonders whether they are the Trinity forms or the forms of Nar and Narayan.

During the time Hanuman was studying under his preceptor, the Sun God, pleased with Hanuman’s proficiency, Surya Dev adorns him with a divine necklace. He mentions that the necklace could be seen only by a special person who would be the incarnation of Bhagwan Vishnu and since then, he would become Hanuman’s master forever and their relation would be cherished in all times. Who else, but Shri Ram notices the necklace in Hanuman’s neck and he immediately recognises Hanuman.

But Shri Ram does not show it and asks Hanuman as to who is he. When Hanuman refuses to answer, Lakshman gets irritated and says to his brother that they better go and search for Sugriv themselves instead of wasting their time. But Shri Ram instead says to Lakshman that he is quite impressed by the sweet words of the Brahmin in Sanskrit and also his knowledge.

He says to Lakshman that this noble Brahmin could lead them to Sugriv and turns to Hanuman and says that they were the sons of Maharaj Dasarath and they were seeking the friendship of Sugriv for searching the whereabouts of Mata Sita.

No sooner that Shri Ram spoke this, Hanuman realises that he was face to face with his swami for whom he was waiting since long and falls at the lotus feet of Shri Ram. He ridicules himself for not recognising his swami and asking Shri Ram himself about who he was. But, Shri Ram lifts Hanuman and embraces him and both are lost in the ecstasy of meeting each other. Thus begins a new and an important chapter in Ramayan which brings out the essence of devotion in the most magnificent way.