When all the forces of strength join hands for the cause of Dharma, there is nothing which can stop them. Truth needs to wage a battle to win over the evil, but battle means bloodshed and loss of lives. Hence, the kind hearted Shri Ram decides to give Ravan a last chance. Shri Ram calls upon Angad, the valiant and wise one and asks him to go as a messenger to Ravan and talk about him about returning Mata Sita back and avoid war. 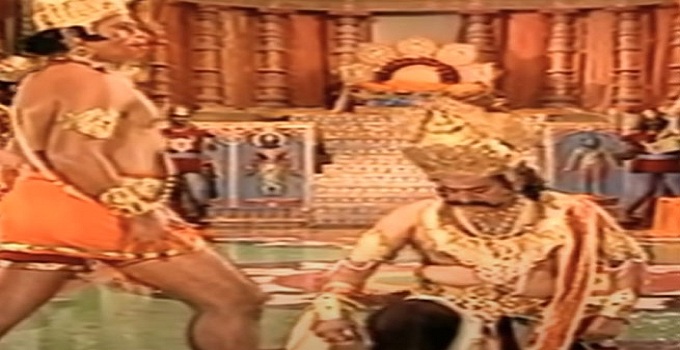 The mighty, but humble Angad, takes the blessings of Shri Ram and arrives at the court of Ravan with the message of peace. As usual out of his arrogance, Ravan ridicules Angad at his arrival. Out of his imprudence, he does not even offer Angad a seat. Angad gets irritated at the attitude of Ravan and coils up his tail as a seat even higher than Ravan’s throne sits on the top of it. A prime duty of a messenger is to make peace, but when the opponent takes to ridicule, it is his duty to equally show his capability and strength. Angad by seating himself above all sends a warning not to underestimate the army of Shri Ram.

After knowing that Angad was Bali’s son, Ravan tries to apply his evil tactic in creating a rift between Angad and Shri Ram by offering to make Angad the king of Kishkinda. But Angad warns Ravan not to play his cheap tricks. Then Ravan tries to create fear in Angad by boasting of his power and Angad retorts back reminding Ravan of his defeat with Bali and Sahasrabahu and now in the hands of Shri Ram. Finally he warns Ravan to surrender to Shri Ram which could save Ravan from death and also the lives of many.

Ravan gets enraged and asks his guards to capture Angad. But Angad decides to teach Ravan a lesson. As an intellect messenger thinks, Angad thinks it is really important that to challenge the warriors of Ravan and prove them as a failure for their evil conduct.

Angad puts his foot forward firmly on the ground and challenges all the warriors to move it. He challenges that if they could move it, then he would take it as not only his defeat, but also of Shri Ram. All the gallant warriors like Prahast, Mahaparshv, Mahodar, including Indrajeet come ahead, but fail. They succumb to defeat unable to move Angad’s foot and retreat with shame. Witnessing the defeat of his warriors, Ravan steps ahead. But Angad immediately draws his foot back and says that it is Shri Ram’s feet that Ravan should catch, but not his. But to embarrass Ravan, he takes Ravan’s crown and rushes back to Shri Ram with his task done. 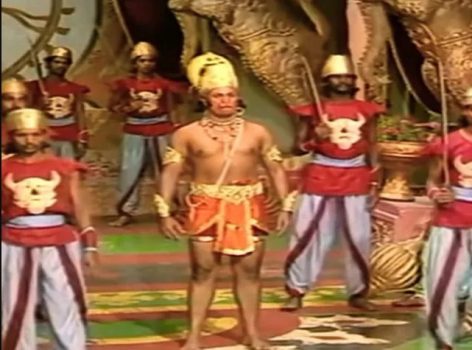 Angad’s reasoning and intelligence are very well proved by his act of removing his foot as soon as Ravan comes. The first one being, Angad respected a superior warrior like Ravan and did not feel it right to make him touch his feet. The second reason is that he had challenged the warriors of Ravan’s court, but not Ravan himself and finally the third is Angad did not give a chance to let Ravan know his limitations of strength. Although the peace treaty is not heeded by Ravan, Angad is successful in displaying the power of Shri Ram and his army single handed in the court of Ravan.