The Almighty born as a human, Shri Ram personified how a human should lead his life, and set ideals for the fulfilment of Dharma through his very own situations in life. Though the journey was not easy, Shri Ram never had his personal choices come in between his relations with his family. Shri Ram imparts that when one has relations to take care of, they should be taken care wholeheartedly, instead of expectations for the same.

Being the elder son, Shri Ram was never proud of his inheritance nor did show his authority, but portrayed exceptional qualities of how a son should fulfil his duties towards his parents. For him, after his father, all three mothers were same and he gave equal regard to all. Even though, he knew the intention of his step mother Kaikeyi in sending him to exile, he took it as her wish and went ahead to fulfil it. He stopped Lakshman and all the people of Ayodhya to rebel against his parents and avoided great conflict in the kingdom. He does not step back even when Kaikeyi herself requests him to return back to Ayodhya, as he believes that his father’s promise would be broken. He never held Kaikeyi guilty and also requests his father too to forgive her, a quality which is very difficult for one to acquire. As a son, Shri Ram proves that the parents are the roots of the family tree on which one grows and spreads and it should never be cut off and always be taken care of.

If love can be measured, then the Ram Setu is just one small example of Shri Ram’s love towards Mata Sita. The relationship of a husband and a wife is determined not when they are together in happy times, but when they go through separation and yet stay together in their heart. When Mata Sita is abducted, Shri Ram walked from one forest to the other, crossed the Ocean, killed Ravan and took her back giving her all due honour. Shri Ram though never expressed his affection for Mata Sita openly, the incident where he makes Kakasur run all the three worlds for biting Mata Sita shows the depth of love he had for Mata Sita. As a husband, he was her good friend, trusted her, gave respect to her decisions , never left her alone and protected her too , thus fulfilling his duties, not with an obligation, but only with pure love as a husband to Mata Sita. 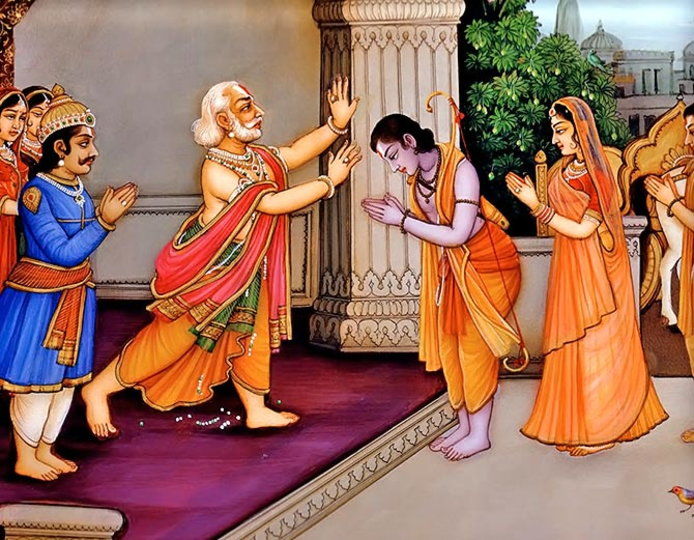 When Maharaj Dasarath declares Shri Ram the king of Ayodhya, Shri Ram is more worried than happy. When Mata Sita asks him the reason, he says that just as how he has shared everything with his brothers, why he couldn’t share the kingdom with his brothers and why he alone was declared King. This is a simple example which depicts Shri Ram’s love for his brothers. Shri Ram was not only their elder brother, but a mentor to be together with love and care while imbibing qualities of truth and humility. He counselled them and also took their advice as a friend and made their bond strong forever in life. Even today, when mentions brotherhood, it is the four brothers who come to one’s mind. Shri Ram won as a family man, and then he won the love of the entire world by being the perfect family man.