We all know that Kedarnath is a religious place and all age groups want to visit there because of its mesmerizing beauty. Kedarnath temple demonstrates the beauty of nature on an extreme level, the sun’s rays touch the dome of the temple when it rises and that scenario is a joy for the eyes. It is located on the Garhwal Himalayan range, near the Mandakini river. Due to weather conditions, the temple opens only between the months of April and November, the autumn full moon. During the winters, the vigraha (deity) from Kedarnath temple is carried down to Ukhimath and where the deity is worshiped for the next six months.

Kedarnath means the God of the field, and that shrine is dedicated to Lord Shiva. According to the beliefs Lord Shiv agreed to dwell there on the request of Narnarayan. When the Kurukshetra war was over, sage Vyas suggested the Pandavs to sought the forgiveness of Lord Shiva for killing the blood relatives. But Lord Shiva had his own plans and decided not to forgive, he turned into a Bull and hid on the hills but Pandavs tracked him, he tried to disappear and he put his head into the ground, Bhim grabbed his tail to stop him, forced him to appear in front of them and forgive them. Bhim could only manage to get hold of his hump. 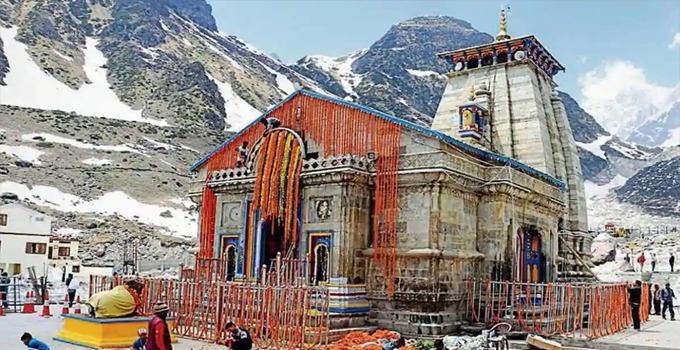 It is to be said that later the five Pandavs built the first temple in the Kedarnath on the place of the hump of the bull. The portions of Shiva’s body later appeared at four other locations, and collectively these five places came to be known as the five Kedars (“Panch kedar”). According to the Hindu scriptures, Kedarnath is one of the twelve Jyotirlings as well. The present glory of the shrine was built by Adi shankaracharya, and the place becomes the Tirthsthal. This place had endured several massive disasters, but with time it’s elegant beauty comforts us all and makes us forget all the pain and sorrows under the roof of nature. It is also a dreamland for many people, who wish to visit there at least once.