After Shri Krishna leaves the mortal world and goes back to his Vaikunth Dhaam, the Pandavas too decide that the time for them to leave the world has come too. Yudhishtir crowns his grandson Parikshit as the king of Hastinapur under the care of Yuyuts, the noble Kaurava brother and all the Pandavas along with Draupadi leave on their journey to heaven. 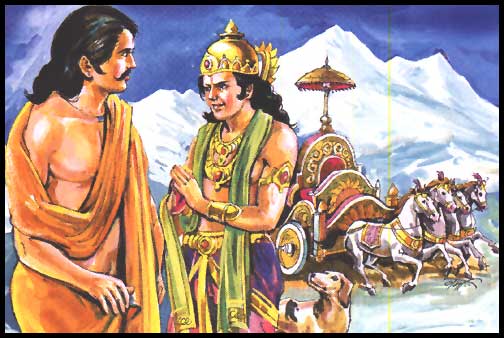 During their walk in the Himalayas, a dog requests Yudhisthir to join them and he agrees and all start walking. While crossing the Himalayas, first Druapadi falls tired and dies. After sometime, Nakul falls down and later Sahadev. The three brothers along with the dog continue their journey, but at a certaim point Arjun falls down and then Bheem. Only Yudhisthir is left and he continues the journey with the dog.

Finally, he reaches heaven and all the celestials welcome him. They welcome him and ask him to enter the heavens, but without the dog. Yudhisthir refuses on the ground saying that the dog was his loyal companion from Earth till heaven and he did not want a place in haven without a place the dog. At that time, the dog takes the original form of Yamraj, the god of death appears and blesses Yudhisthir that all this was a test for the Dharma of Yudhisthir. Then, Yudhishtir enters heaven and is surprised to see Duryodhan there and even surprised to see that none of his brothers and Draupadi was present in heaven. When he asks the Devas the reason for their brothers and Draupadi’s absence, the Devas says that they were in hell suffering for their mistakes. Surprised, Yudhisthir asks them what their mistakes were. Then the Devas mentions that as Draupadi was partial to Arjun, she first fell. Sahadev took pride for his intelligence and Nakul for his beauty and hence the twins fell next. Although Arjun was a great warrior, it was the power of Shri Krishna which made him so, but as he had a slight tinge of pride in him as an archer, he had to succumb. As Bheem was proud of strength of thousand elephants, he fell too. It was only Yudhisthir who never took pride in spite of all virtues and who never left Dharma and hence he did not have any obstacles in reaching Heaven.

Then Yudhisthir asks the reason as to why Duryodhan was in heaven in spite of being a sinner. The Devas reply as he had left his life following the Kshatriya Dharma as a warrior in the battlefield, he could reach heaven. Yudhisthir listens to this and requests the Devas to get back his brothers. But, the Devas refuse that they had to undergo their punishment for the sins. Then Yudhisthir mentions that he would not like to enjoy the comforts of the heaven while his brothers rotted in hell and requests Yam Raj to take him where his brothers are, as he believed that where his brothers and wife were there, there lied his heaven.

The Devas are immensely pleased with the selflessness of Yudhishtir and mentions to him that his selfless act has redeemed all the small sins of his brothers and says that this was just a test to see the virtuousness of Yudhisthir and the Pandavas were already in heaven waiting for their brother. Yudhishtir happily reunites with his brothers in heaven. This story is one of the great ones which speak volumes about the virtuous Yudhisthir who did not think twice to refuse even the heavens for his family and brothers.