The Almighty Bhagwan Vishnu pervades all Universes in his cosmic form and is beyond birth and death. He takes innumerable forms and incarnations to protect Dharma and help good triumph over the evil. He is the greatest support for the devas in punishing the evil demons whenever they hinder Dharma. In such a great task, the weapons which assist him in maintaining the balance of the Dharma in the world are five which are the Sudarshan Chakr (Discus), Panchajanya (Conch), Sarang (Bow), Nandaka (Sword) and the Kaumodaki (Mace) 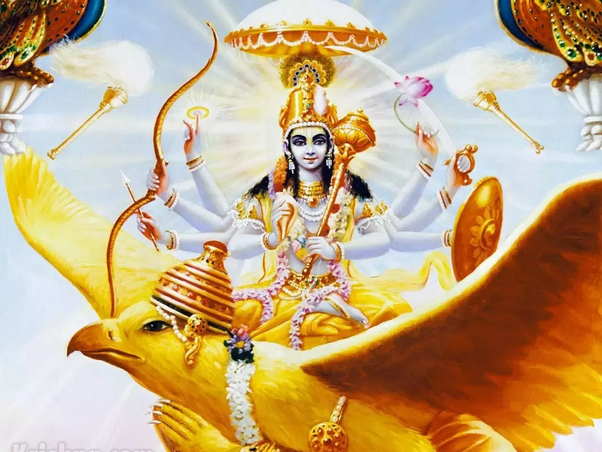 Each weapon of Bhagwan Vishnu has a special significance and radiates his power in his task of destroying evil. The Sudarshan Chakr is the mighty discuss which a spinning wheel of fire is. It cuts the enemy’s head at the command of Bhagwan Vishnu. It was made by the divine architect Vishwakarma out of the dust of sawing the sun to reduce its brightness. Bhagwan Vishnu adorned it as his weapon which destroys all the evil of the world in a whiff of a spin.

The Panchajanya (Conch) is the great conch found by Bhagwan Vishnu in the avatar of Shri Krishna. In the Krishna Avatar, Shri Krishna and Balram go in search of their Guru Saandip’s son who was taken away by Yama, the god of death. In their journey, they come across a demon Pancha who was hiding in the waters of the Ocean. Shri Krishna pierces his stomach and kills him and finds conch in his stomach. As it was found in the body of the demon Pancha and came out of his stomach as if taking a new birth (janya) the conch came to be known as Panchajanya and became one of the weapons of Bhagwan Vishnu. The Panchajanya emits great sound and creates fear of Bhagwan Vishnu in the hearts of the evil doers.

The Sarang is the great bow which was created by Brahma Ji along with the Pinaka Bow of Bhagwan Shiv. Later Bhagwan Vishnu granted the bow to Rishi Richika who later gave to Rishi Jamadagni.  Later when Parashuram, the son of Jamadagni came to know that Shri Ram had broken the bow of Bhagwan Vishnu, he takes the Sharang with him and in a way of testing his skill, hands it over to him. Thus, the divinity of Parashuram as Bhagwan Vishnu passes over to Shri Ram. Later Shri Ram returns the bow to the Water God, Varun for safe keeping till his next incarnation of Shri Krishna.

Nandaka is the sharp sword of Bhagwan Vishnu.The Agni Puran mentions that once Brahma Ji performed great penance to acquire a sword for Bhagwan Vishnu to kill a demon. Because of the heat of the sword, the demon’s body was transformed into pieces of iron with the contact of the sword. Bhagwan Vishnu then granted the demon a boon that weapons on earth would be made out this iron hereafter. Since then Bhagwan Vishnu came to be known as Nandakdhara (the one who yields the sword Nandaka).

Kaumodaki, the mace of Bhagwan Vishnu represents the physical strength of the Almighty. The mace was made out of a single bone of a demon Gadha by Vishwakarma and presented to Bhagwan Vishnu. With these five weapons, Bhagwan Vishnu protects and preserves the Universe and it is believed that worshipping the Panchayudha form of Bhagwan Vishnu removes all fears from mind and gives protection from all negative energy and evil.