While the world believes that aircrafts were designed by the westerners, it is well known that since the time of Ramayan, aircrafts and the technology of creating them was present in our land. The flying wonder of Pushpak viman was one amongst the many aircrafts Ravan possessed. 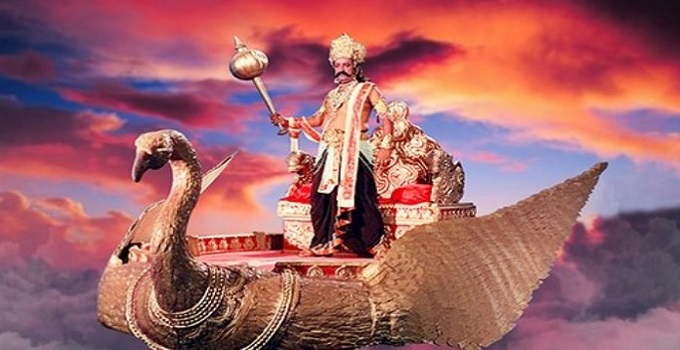 The Pushpak Viman was created by the divine architect Vishwakarma. The god of wealth, Kuber attained it from Bramha Ji after pleasing the latter with his penance and austerities. When Ravan conquered the city of Lanka, which was originally Kuber’s, he took over the possession of the Pushpak Viman too. This Pushpak Viman was capable of flying anywhere in the world. Ravan made it his vehicle and travelled all the three worlds. He had many adventures to his name while travelling in the same aircraft, namely the one with the Vanar Warrior Baali, the thousand armed warrior king Kartaveeryjun and also to Mount Kailash where he attained the divine swordd Chandrahas from Bhagwan Shiv.

Hanuman while searching for Sita comes across the Pushpak Viman and he is astonished at its golden shine and it looked like a palace in the sky. Not only for its built up marvels, but it was popular for its speeding technology too. When Shri Ram was worried as to how would he reach Ayodhya in a day’s time to stop Bharat from sacrificing his life, the solution comes in the form of Vibhishan. The gentle friend of Shri Ram removes his worry by mentioning not only the trio, but the entire Vanar army could travel back in the aerial aircraft Pushpak Viman in the speed of mind’s thoughts. Ascending the aerial chariot, Shri Ram travels swiftly back to Ayodhya and reaches Bharat in the correct nick of time. The Pushpak Viman is an example that there existed technology which was beyond measure right from the Ramayan times. With such extra ordinary craftsmanship, Pushpak carried Shri Ram, Mata Sita, Lakshman, Vibhishan, Sugriv, Hanuman Jambavant and all of the Vaanar army back with them to Ayodhya to witness the coronation of Shri Ram.

Unlike Ravan, who had a desire to possess all the wondrous objects under his control, Shri Ram send the Pushpak to go back to its true owner, Kuber. At Alkapuri, the abode of Kuber, Kuber welcomes the Pushpak, but very humbly says that it would belong to none other than Shri Ram itself, and requests the Pushpak to go back to Shri Ram, which the aircraft does. But the compassionate Shri Ram relieves it to be free of all and roam as it wishes. The Pushpak Viman is an outstanding example of modern aircraft technology in the ancient times which stands as the pride of our Santana Vigyaan Sastras.