A wise man learns from his mistakes and tries to change for the better. An egoistic character thinks the quite opposite and thinks of ways to take revenge. Ravan does exactly the same when Shri Ram leaves him without killing him and gives him another opportunity to live. Unlike a true warrior, instead of accepting his opponent’s strength, he thinks of ways to subdue his power in vengeance and increases his enmity towards Shri Ram even more. He thinks deeply as to whom to send to the battle field and his mind sets upon his younger giant brother Kumbhakarn. 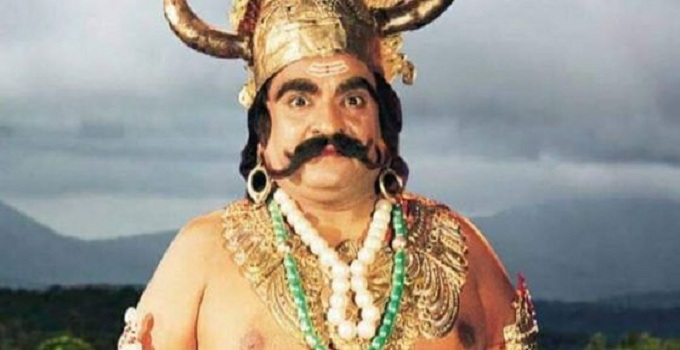 Kumbhakarn was the second son of Rishi Vishrava and Kaikesi after Ravan. Soon after his birth, he devoured living beings for food due to his gigantic size, and all were terribly frightened. He grew up in enormous size and along with his brother Ravan harassed the celestials. Once in a fight with Devas, Devraj Indr hurled his thunderbolt at him, but Kumbhakarn came to no harm. Kumbhakarn becomes furious, rushed to Indr and pulled a tusk of Indr’s elephant mount Iravat and stuck a huge blow defeating Indr with great prowess.

During his penance to Brahma Ji, the Devas fear that Kumbhakran would ask him the seat of Indr, and hence they ask Goddess Saraswathi to make him say the other way round. When Brahma Ji asks Kumbhakarn for a boon, due to the illusion of Goddess Saraswathi, he asks for Nidrasan instead of Indrasan, and Brahma Ji grants him the same. But Ravan is dejected by this and requests Brahma Ji to change his boon. At Ravan’s plea, Brahma Ji says that he would be awake for one day in the year after six months, and that day none would be able to kill him. However if he is forcefully woken up during his sleep, he would meet death in the hands of the enemy.

Ravan forgets about not waking Kumbhakarn during his slumber in his thoughts of war and sends his soldiers to wake Kumbhakarn. After huge efforts, they finally are successful in waking him up and report the events happened in Lanka right from the abduction of Mata Sita to the war. Kumbhakran by nature was a demon, but with differentiation between good and bad. He understands that what Ravan did was wrong, but he abides to his brotherly love and gets ready for battle and goes to Ravan. 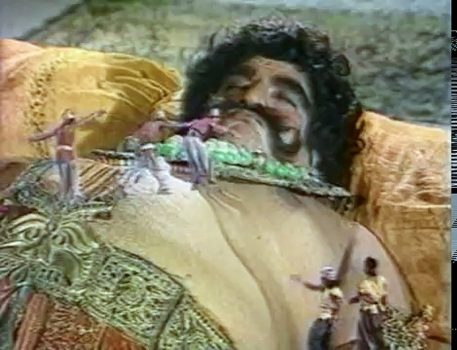 As a final attempt, Kumbhakarn warns Ravan about his curse that he would be killed by the scion of the Ikshwaku dynasty and he doubts Shri Ram to be the same. He ridicules Ravan that as a wise king, he did not seek proper counsel and instead took decisions based on the statements of an unstable minded woman like Shurpanakha. But, Ravan as usual does not pay any attention to Kumbhakarn’s advice and instead rebukes him for talking against him. Kumbhakarn understands that Ravan in the vengeance mood is calling his own death.
Kumbhakarn says that it is the foremost duty of his to fight against anybody who attacks Lanka and hence he would fight the enemy. He knew that victory was at the end of Shri

Ram, yet he goes to wage battle against Shri Ram and his army. Although Kumbhakarn reasoning was on the side of Dharma, yet as he had to abide to his brother’s command, he went on to meet his death in the great war with Shri Ram.