Rishi Valmiki has named the Kands of Ramayan based on the situations and context of the story. When depicting the childhood of Shri Ram, he named it Balkand, when Shri Ram was in exile, it was Aranya kand and Shri Ram met Sugirv, it was Kishikinda Kand. The Kand wherein Hanuman goes to Lanka, should hence be named Lanka Kand, but instead it is called the Sundar Kand. There is a specific reason for it to be named so. Rishi Valmiki has filled this Kand with beautiful poetry, metaphors which describe the magnificence of Lanka, the meeting of Hanuman with Mata Sita and finally Hanuman coming back to Shri Ram with the good news about Mata Sita’s location. As the descriptions are very beautiful especially of the city of Lanka, Rishi Valmiki himself named it Sundar Kand (Sundar meaning beautiful) 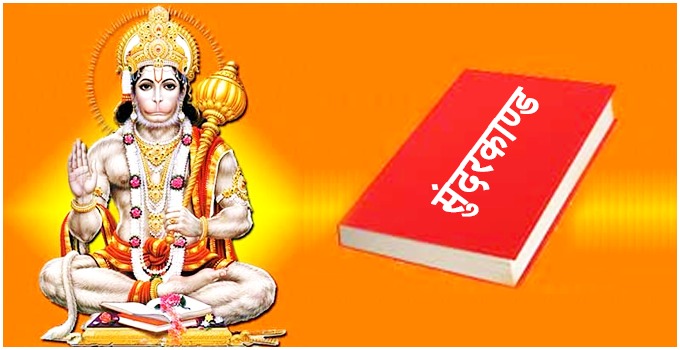 After sighting Lanka in his journey, Hanuman lands over the magnificent Trikut Mountain and spends the day over there watching the magnificent city from there. Lanka was situated in midst of a plateau surrounded by three peaks of the Trikut Mountain. (Trikut meaning three peaks) Geographically it was safe guarded by the Trikut Mountain from three sides and the vast ocean from one side, hence making it impossible for anyone to attack it. The city of Lanka was built by the divine architect Vishwakarma and it was more beautiful than the heavens. It earlier belonged to Kuber, the God of Wealth and the brother of Ravan.

Hanuman while witnessing the beauty of the city notices forests and gardens with beautiful trees filling the city with their fragrances. There were various beautiful fruits and flowers of all seasons, and had numerous ponds filled with swans and ducks, lotuses and water lilies.

Hanuman enters the city and witnesses the glorious city of Lanka surrounded by four golden walls and gates, well protected and even more vigilant since Mata Sita’s abduction. The houses were eight storeyed buildings which looked as reaching the heights of mountains, decorated with beautiful flag posts and archways. The roads were wide in perfect planning. The city looked as if it was floating in the air and looked like another Kailash Mountain. In the moonlight, he observes how effectively the city was guarded and was thinking on all possibilities of how the vanars could win over this splendid city,

After entering the palace of Ravan, he sees Ravan asleep on the couch, among various damsels who were asleep after entertaining him with dance and music. Hanuman then sees a beautiful lady who was away from all the ladies and sleeping on a bed. His first thought was she might be Mata Sita, but then again applying reason and thought he understands that Mata Sita would never be in a palace being separated from Shri Ram. Scattering his doubts, Hanuman searches again and finally reaches Ashok Van, the most beautiful garden of Lanka. Hanuman finds a woman under a Simsupa tree, but grief stricken and weak, yet shining like a full moon, overcast with clouds.

By virtue of her features, Hanuman recognises her to be Mata Sita. He feels both happy that he finally found her, and also sad that she is in a sorrowful state, and waits for a chance to speak to her when all the demonesses guarding her would be away.

Thus, Hanuman’s journey to Lanka becomes a successful mission through his faith and determination. It is with the entry of the mighty Hanuman that the golden days of the golden city of Lanka start their countdown.