An immortal is the one who has the boon to live forever without the fear of death. In our Purans, eight great personalities are known as the Chiranjeevi, (meaning Chri- long, Jeevi- to live). It is indeed wondrous to know that even after so many Yugas have passed, they still exist in the annals of time. 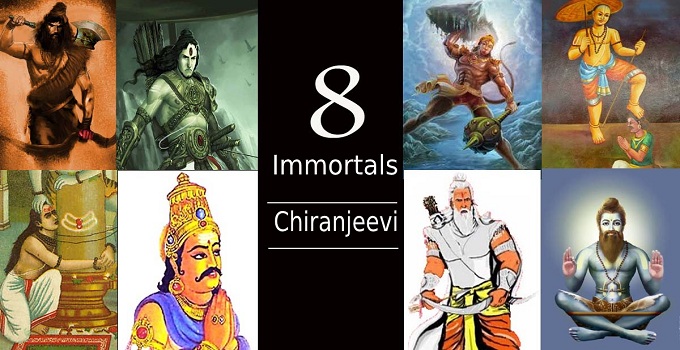 Markandeya’s is an immortal whose story is mentioned in the Bhagavata Puran. He was the son of Rishi Mrikandu and Mardumati. When Rishi Mrikandu was given a choice between a foolish son with long life, or an intellectual son with a short life, Rishi Mrikandu opted for the second. Markandeya comes to know about his short life and he meditates on Bhagwan Shiv to save him from the god of death, Yam. Pleased with his penance, Bhagwan Shiv grants Marakandeya, the boon of immortality and rescues him from Yama. Markandeya lives through the Yugas and learnt the concept of Maya under Bhagwan Vishnu.

The King of demons, Bali Chakravarthi is an immortal. When Bali Chakravarthi does a Yagn to conquer the celestials, Bhagwan Vishnu subdues him and sends him to the Patal Lok. But, pleased with his humility, Bhagwan Vishnu grants him immortality and a boon to visit his subjects once a year, which is celebrated as Onam in Kerala. Shri Hanuman was blessed by immortality when he subdued the Sun god as a child. However, pleased at his unending devotion towards Shri Ram, he was offered salvation and merge with Bhagwan Vishnu. But Hanuman refused it and said that he would remain on Earth till the day Shri Ram is worshipped as nothing is dear to him than Shri Ram’s devotion. Thus he still lives in the places, hearts and minds of all who chant the Ram Naam with devotion.

The first Guru of the Pandavas, Kripacharya is also an immortal. He is the grandson of Rishi Gautam and later was adopted by Maharaj Shantanu. He was granted immortality as he leads a very pious life. Parashuram, the sixth incarnation of Bhagwan Vishnu is one of the Chiranjeevi on Earth. He was granted immortality by his father Rishi Jamdagni when he obeyed his father’s order to cut off his mother Renuka’s head. After he passed on his divine spirit to Shri Ram in Mithila, he retired to the Mahendra Mountain. He was the Guru of Bhishma and Karna in the Dwapar Yug. He is believed to appear once again at the end of Kali Yug to teach Kalki, the art of weaponry.

The dear friend of Shri Ram, Vibhishan was granted immortality by Brahma Ji because of his righteous conduct and selfless life. The author of the timeless epic, Mahabharat, Rishi Ved Vyaas has also believed is also a Chiranjeevi. He was originally called Krishna Dvaipayan, but because he classified the Vedas into a proper format, he was given the name Ved Vyaas.

Aswatthama, the son of Guru Dronacharya is also one of the immortals. However, Aswatthama earned the wrath of Bhagwan Krishna when he killed the sons of Pandavas after the final war. Shri Krishna pulled off the gem in the forehead which gave him the radiance of immortality, and thus Aswatthama though immortal, suffer from diseases till the end of Kaliyug. These eight immortals conduct of life gives many insights into Dharma and they continue to live watching the journey of Dharma in the annals of time.