The world celebrates Dussehra as a mark of victory of Shri Ram over Ravan. The great epic of Ramayan is the story of how a virtuous human, with his conduct, behaviour, choices and courage becomes an inspiration for millions around the world. Ramayan is recited, heard, learnt and practised in innumerable forms not only in India, but also in the whole of the world with great devotion and fervour. However, the bliss of being engrossed in the chant of Shri Ram is due to the great contribution of Adi Kavi Rishi Valmiki, who was the world’s first poet and who wrote the first Makahakavy Ramayan for us to understand the greatness of Shri Ram.

Previously, Valmiki was called as Ratanakar, who was a hunter. With the divine intervention of Rishi Narad, he seeked true knowledge. Rishi Narad asked him to chant the words MA RA and asked him to observe penance. Ratanakar went on to chant the two words for years together and the two words came to be transformed as RA MA. One day, a group of rishis passing through heard the chanting coming from the anthill and dug it. They saw Ratnakar in the anthill shining with radiance. As he came out of an anthill (valmikam in Sanksrit), he was renamed Valmiki.

After the transformation of Ratnakar into Rishi Valmiki, Brahma Ji appears in front of him and reveals the real purpose of his birth. He mentions to Rishi Valmiki that the virtues of Shri Ram, his conduct and abiding to principles of truth need to be known for the mankind to follow the path of Dharma and enable their life to be a virtuos one. On the command of Brahma Ji, Rishi Narad recites the complete story of Shri Ram to Rishi Valmiki who sets an example as an embodiment of truth, nobility, humility, valour, courage and kindness.

Rishi Valmiki gets deeply inspired by Shri Ram’s persona, but does not understand how to put it in a way that is understandable and orderly manner. With these thoughts, he goes to take a bath in the river. At the river, he sees a couple of Krauncha birds engrossed in love. Suddenly, a hunter appears and shoots an arrow at one of the Krauncha Bird, and it succumbs immediately. Unable to see its partner fall, the other Krauncha bird cries bitterly suffering from the pangs of separation of its partner. 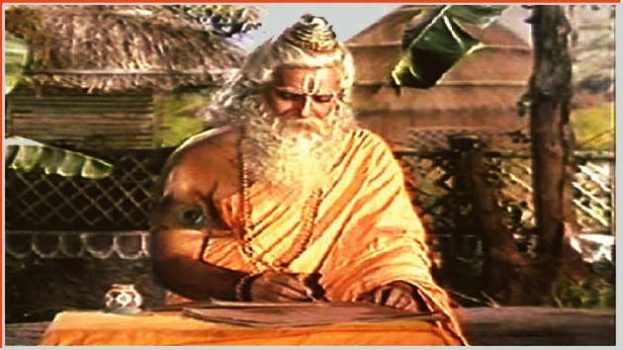 Rishi Valmiki is outraged at the hunter for separating the bird couple and he curses the hunter in verses coming spontaneously from his mouth out of anger and grief. मा निषाद प्रतिष्ठां त्वमगमः शाश्वतीः समाः। यत्क्रौञ्चमिथुनादेकमवधीः काममोहितम्॥.After reciting this shlok, Rishi Valmiki realises that he has uttered the verses in a proper metrical way and in perfect grammar.