Bhagwan Vishnu in his innumerate forms depicts many divine virtues. One such Avatar is of Shri Hayagreev, the God of Knowledge and wisdom who is worshipped in the form of human body and horse head (In Sanskrit, Haya means Horse and Greev means Neck). He is white in colour and adorns white garments and is seated on a white lotus. He symbolises pure knowledge. 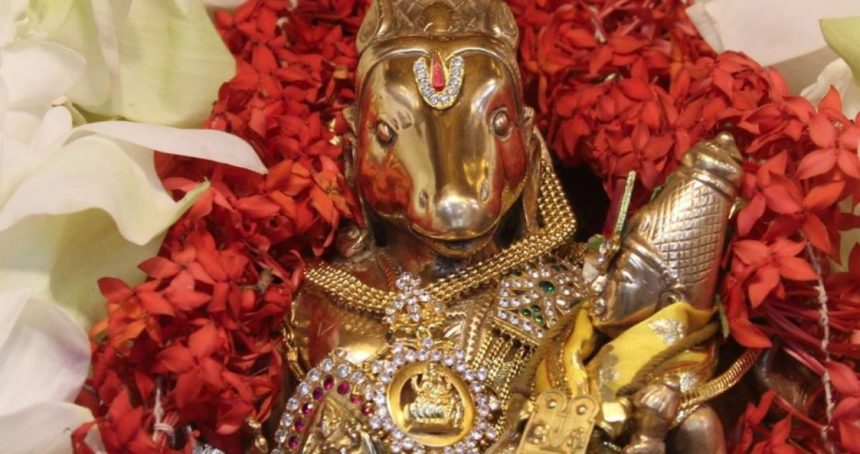 The incarnation of Bhagwan Vishnu as Shri Hayagreev is mentioned in the Shanti Parv of Mahabharat, which he took to kill the demons Madhu and Kaitabh. The demons once stole the Vedas from Brahma and scattered them in the deep oceans. Bhagwan Vishnu took the form of half human and half horse to recover them. After he collected them from the depths of the Ocean, he grew huge in size and killed the demons by crushing them in his thigh and disintegrated them into twelve pieces and threw them away in different parts of Bhulok, Since then, the Earth came to be known as Medhini, as it bears the weight of the two demons.

Hayagreev then restored the Vedas back to Brahma Ji and balanced creation from falling into evil hands. It is also believed that he compiled the Vedas into a proper format and handed them to Brahma Ji, and hence he is worshipped as the representation of Knowledge.

The Devi Bhagavat mentions that Bhagwan Vishnu took the form of Hayagreev to kill a demon with the same name. There was once a demon named Hayagreev who got a boon from Brahma that he could be killed only by his namesake. With his greed, the demon did not want the human race to derive the benefits of the four Vedas and thus stole them from Brahma Ji. Bhagwan Vishnu then took the avatar of half human and half horse, and being named Hayagreev, killed the demon with the same name and restored back the Vedas to Brahma Ji.

God Haygriv is considered to be the guru of Goddess Saraswathi too. He is worshipped as the embodiment of spiritual growth, knowledge and intelligence. The horse is considered to be the wisest of all animals and also known for its swiftness abilities. While running, the horse does not look anywhere but only looks straight ahead and thus, is able to run swiftly. The representation of Hayagreev as the horse faced one is worshipped to gain intellect and also to have good concentration powers and proper focus with quick grasping powers to achieve scholastic education.

The chanting of Shri Hayagreev is popular as the Haygriv Shloka and is specially taught to students and seekers of knowledge which goes as ज्ञानानन्दमयंदेवं ननममलस्फटिकाकृ नं  II आधारं सवमववद्यानां हयग्रीवं उपास्महे II This chanting of this is believed to boost memory power and concentration. In our Sanatana Dharma, Shri Hayagreev is depicted with a horse face with his consort Bhagwathi Lakshmi seated on his lap. He has four hands, where he holds books in one hand, the Abhaymudra of

bestowing knowledge, and the Sankh and Chakr in the other two. He is worshipped especially on the Poornima of the Shravan month and the Navami of the Navaratri festival for achieving success in education and gaining wisdom.