Ramayan is the story of a human who walked on the path of Dharma all his life in joys and sorrows and set the greatest ideals of humanity to be followed for generations to come. His greatness lies in not making only humans follow him , but the way in which he inspired all genres to put it all their efforts for his cause of adherence to Dharma.

Jatayu – Compassion is so great that it makes a vulture the dearest friend of Shri Ram. The bond of Shri Ram and Jatayu was a special one of that of a father and also a protector. Jatayu offered Shri Ram protection in Panchavati and gave his life for the same. He fought Ravan with all his strength and tried to save Mata Sita from his clutches. It is only through deceit that Ravan wins the fight by cutting the wings of Jatayu, yet Jatayu’s mission was not a failure. He saves his breath till he tells Shri Ram the direction in which Ravan took Mata Sita, laying down the first foundation for Ravan’s doom. With his ultimate sacrifice, he becomes an epitome of heroism and friendship between man and animal. 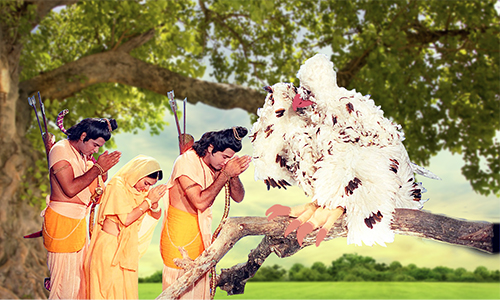 Hanuman – Hanuman was no mere monkey, but a representation of strength, courage, humility and faith. He becomes the first one to cross the major obstacle of the Mighty Ocean and reach Mata Sita. With all his devotion set in Shri Ram, he single handedly destroys the golden city of Lanka, and fights the mighty warriors of Lanka. With saving Lakhman’s life, he sets an example of heroism that can move mountains. With his life devoted in Shri Ram’s servitude, he is the icon of bhakti and Shakti gained through his heroic and humble deeds.

Vibhishan – There is no boundary of a human or a demon when it comes to standing up for Dharma, says Shri Ram. With profound belief in the same, Vibhishan leaves his home, kith and kin and surrenders in complete faith to Shri Ram. Tired of his brother’s atrocities, Vibhishan leaves his brother for good and does his duty in protecting Dharma. He gives wise counsel and advice in battle and helps Shri Ram secure victory in the battle. One need not be a warrior in battle, but being courageous enough to stand and fight for truth against his own people also is heroic proves Vibhishan.

Jambavant – The most intellectual being among Sugriv’s ministers, Jambavant with his timely council and wisdom advises Shri Ram and helps him in his fight for Mata Sita. It is because of the motivation of Jambavant that Hanuman crosses the mighty ocean. His wise strategies help the young Vanar warriors plan wisely in the war and not lose their composure in times of need. When Lakshman falls unconscious, Jambavant provides solace and confidence to Shri Ram that Hanuman is the one who could bring the Sanjeevini herb and save Lakshman’s life.

As the Maryada Puroshottam, Shri Ram paid all his regards and respect duly with all his love and affection on these noble heroes who helped him in the fight for Dharma. Shri Ram is an outstanding example that when a human stands firm on retaining Dharma, then he is inspiration to all genres to follow his path and serve the purpose of Dharma.