When Shri Ram walked over on the land, each place where he stepped became the pious place of worship. The journey which Shri Ram undertook was not just to eradicate the demons, but also  make his devotees feel his presence through his journey. In Shri Ram’ life, there are five places where the most important events of his life occurred and also known as the places where Shri Ram has taught mankind some of the very intriguing lessons of Dharma. Hence these places are popular as the Pancha Teerthas of Ramayan. 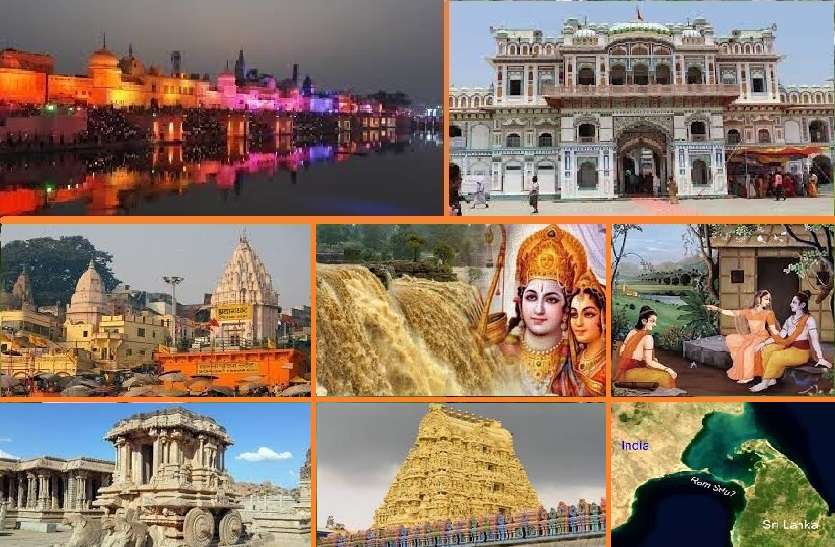 Ayodhya – The Janma Bhumi of Shri Ram, this was the very place that he laid down the conduct of Dharma for every human of the world by doing his duty as a son, a brother and a prince. While the world visits this place as the birth place of Shri Ram and worships Ram Lalla, it is now the most awaited place for the Ram Mandir to shape as the divine abode of Shri Ram and celebrating his return back to Ayodhya after a long wait.

Chitrakut – This is the very first place Shri Ram chose to spend his exile time. Chitrakut lies on the river bank of Mandakini, a tributary of River Ganga. Colourful with pristine woods, greenery and no rush, Chitrakut is a place of bliss for all. This is the very place where Bharat had come to persuade Shri Ram to come back to Ayodhya and spent five days in the company of Shri Ram. In Chitrakut, the greatest values of brotherhood and sacrifice were expounded to mankind through the conduct of Shri Ram and Bharat.

Panchavati – One of the beautiful places where Shri Ram, Mata Sita and Lakshman spent their time of exile before Mata Sita was abducted by Ravan. This is the very place wherein Shri Ram befriended Jatayu. This forest area still resounds with the memories of Ramayan lingering in every tree and plant and reminds us that this was one of the place dear to Shri Ram.

Kishkinda – Known in the name of Hampi today, this is the place where Shri Ram had met the Vanar King Sugriv and his eternal devotee Hnauman. Historically, this was the capital of the great Hindu dynasty Vijayanagar. Even today, one can see many remnants of Ramayan like Sugriv’ cave, Anjanadri, RIshyamuk and Matanga hills where Shri Ram spent his time waiting to know where Mata Sita was. This place brings out glories of a steadfast friendship of two people which were above all genres of society.

Rameswaram – This is the very place where the impossible became possible. With the help of his Vanar army, Shri Ram builds the Ram Setu across the mighty ocean in just five days to reach Lanka and rescue Mata Sita. Shri Ram prays to Bhagwan Shiv for his victory in this pious place by installing  a Shiv Ling made out of sand, which till date is worshipped as the main deity of the place. Denoting his devotion for Bhagwan Shiv and also asserting the fact that he is not different from Bhagwan Shiv, Shri Ram named the deity as Rameswar (The one who is Ram’s God), and this place has become one of the Pancha Teerthas from where man stepped on to achieving the impossible.

These Pancha Teerthas reflect Shri Ram’s life and the values of Ramayan in every nook and corner and are very pious to every person who follows our Hindu Sanatana Dharma as the divine places of Ramayan.