It’s only with a friend that one can share the deepest of emotions, thoughts, joys and sorrows without any hesitations. A friend’s company is that outlet where one can shrug off the burdens of life and learn to relax. Friendship is an art and Shri Ram teaches us to nurture it to perfection.

Friendship has no inequalities – Being the dearest friend to Nishad Raj, Shri Ram proves that friendship has no barriers of high and low. He never forgets his childhood friend from the Gurukul Ashram and accepts his hospitality with much warmth and affection on the banks of River Ganga. He sleeps on the bed made by leaves by Nishad Raj, eats the roots and tubers bought by him and shows to the world that a friend is the one who accepts the love of the other without judging his place in the society. Shri Ram makes Nishad Raj feel important too, when he gives the task of guarding the borders of Ayodhya as assistance to Bharat while Shri Ram is in exile. This makes Nishad Raj completely bound to the love of Shri Ram and he does his job holding it dearer than his life. The friendship of Shri Ram and Nishad Raj is the most beautiful one of an Emperor’s son and a small tribal king, removing all barriers of high and low of the society.

Friendship is unconditional – When Jambavan puts a proposal of a political treaty between Shri Ram and Sugriv to help each other and get benefitted, Shri Ram out rightly rejects it. Instead he says that he would like to be a friend of Sugriv without any political alliances without any conditions. He kills Bali and makes Sugriv the king of Kishkinda and relieves him of all the suffering he went through with Bali. This action of his proves that a friend who is truthful always is the stronger one and one need not have any conditions in friendships, except for love and affection for each other.
Friendship is patience and forgiving – When Sugriv becomes king, he temporarily forgets the promise made to Shri Ram regarding the quest for Mata Sita. But Shri Ram waits with patience for him to come back. It happens that sometimes friends do get distracted, but a true friend waits for them and also helps them get back to their original path too. Reminded by Lakshman and Hanuman, when Sugriv reaches Shri Ram and asks for forgiveness of Shri Ram, the answer Shri Ram has is a warm embrace to his friend, thus proving that a friend also forgives the mistakes which happen between them. 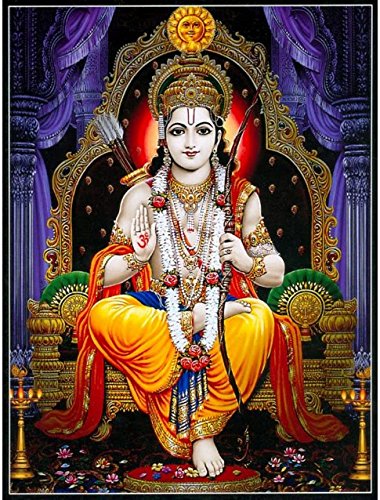 Friendship is trust – Friendship is a beautiful virtue which makes foes into friends, and what else is the greatest example that a person from the enemy camp becomes the dearest friend of Shri Ram. When the righteous Vibhishan approaches Shri Ram for refugee, all doubt his character. But Shri Ram accepts him without any doubts and makes him the King of Lanka as a mark of his friendship. Trust is the greatest foundation of friendship and Shri Ram makes it even stronger by trusting Vibhishan without any conditions, which makes Vibhishan put all his heart and mind in working for the success of Shri Ram in the battle of Lanka. To have a true friend is to be a truthful friend and Shri Ram is one such friend all would love to have.