A leader is the one who leads. Shri Ram and Ravan both in their own ways were leaders one of a kind. However, even with great boons, immense power and unmatched valour, Ravan could not be the perfect leader and Shri Ram on the strength of his virtues and skills became a leader who could inspire not only his people, but further generations too. 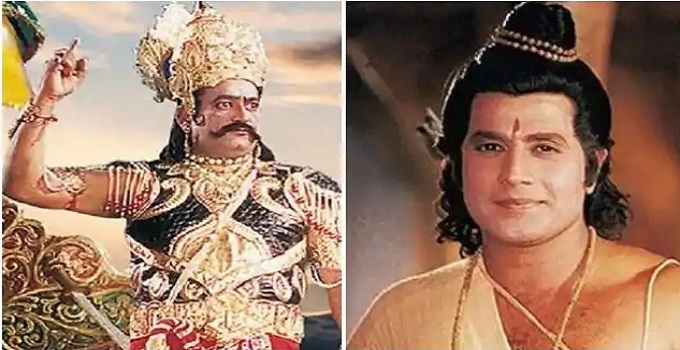 Leadership starts at home. A good leader always stands for his family, protects them and takes their time to time advice in guiding him. Ravan had a great family which came down from Brahmaji and were known for their severe austerities and truthful conduct. Yet, Ravan neglected their honour for his own power and fame. All his family gave him wise counsel when he abducted Mata Sita not to lead to the downfall of the clan, but Ravan’s ego was so high that he led all his family of brothers, sons, and kith and kin to their destruction in the battle against Shri Ram.
For Shri Ram, family honour was everything. Unlike Ravan, Shri Ram sacrificed his own comforts to keep up the name of his ancestors and retained their honour. He went through a life of hardships to not taint his father’s name as a follower of truth. By becoming his family’s inspiration as a leader who united them to stay strong in times of adversities, he laid down steps for his sons also to be followers of Dharma.

A leader who is loud in his words, but not actions is not appreciated. Ravan was lost in the world his own boasting and ridiculed all those who cared for him by bragging about his boons and power including his very own wife Mandodari. A leader who does not appreciate or talk gently with his own people loses their trust and as a leader Ravan put his people’s life at stake by his self-boasting and lost their trust.

Shri Ram won the hearts of all with his gentle polite behaviour. He was firm in his principles, but instead of pushing his beliefs on his people, he persuaded them through patient explanation. Be it convincing Lakshman about Bharat’s nature, or convincing Sugriv about giving refugee to Vibhishan, he achieved it through gentle talk and reasoning instead of giving an impression that he is the decision maker. This nature of Shri Ram made him the adorable one to his family, friends and his entire army Vanar who became ready to give up their life for their leader.

A leader stands for his people before his life. When Ravan wanted to abduct Mata Sita, he put Marich as bait instead of fighting face to face with Shri Ram. Shri Ram on the other hand, protected Vibhishan with his life in the battle of Lanka. A leader values the life of his people as his own even if it is a single person or the entire group. While Ravan’s lust took away the lives of all his people, Shri Ram’s generosity made all the Vanars come alive after the battle when he requested the Devas to give back life to all of them who passed away fighting for him.

Shri Ram and Ravan both were great warriors, skilful and there was none who could match them. But what stands out as the difference is that Shri Ram’s leadership skills teach what qualities a leader should possess wherein Ravan’s leadership teaches what not to do as a leader.